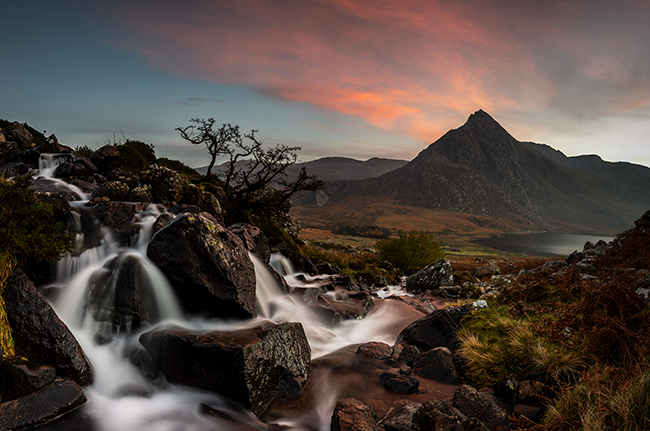 I took 3 clients, Keith, Paul and Graeme away for a few days for a Snowdonia Landscape Photography Workshop during November 2018; it was a very wet week but we still came away with some great shots!

We stayed at Cefn yr Efail, a large and spacious converted barn near to Porthmadog, on the western edge of Snowdnois National Park; a perfect base for exploring the area, being pretty central to the Snowdonia mountains to the north-east, the coastline and castles, north to Caernarfon and south to Harlech and to the many waterfalls in and around the area. With the weather as it was it’s fair to say that we spent more time on waterfalls than I’d planned for!

Each evening was spent productively, with processing and reviewing images and beer!

Header image: The view from Ynyspandy Slate Mill near Porthmadog, Snowdonia National Park: This is a view looking away from the Slate Mill; I was waiting for the light to hit the mill but captured dawn light reaching the hills opposite

So, here’s a review of the 4 days spent trying to avoid the rain! If you’d like to download a copy of this blog please Click Here!

After unpacking our bags and a sandwich for lunch we headed south in the rain to Barmouth. It’s a fairly chaotic place on a Saturday afternoon but we went to photograph the Estuary. My first plan was to capture the railway bridge across the estuary looking out to sea. But with wind and rain in our faces we didn’t stand a chance. We then walked over to the estuary next to the railway line a got a nice composition looking back inland with a hotel standing next to the water. Graeme tried a long exposure shot which was still ruined by the rain – long exposure and rain is usually a bad combination! But as it’s looking east it’s definitely a good spot to revisit in decent dawn light – one to remember for a dawn start!

However despite the weather, Graeme came up with an excellent image. Using a 4 minute exposure he smoothed out the sky and water and produced a monochrome image with great grey tones. Somehow he kept the lens dry underneath a big umbrella! 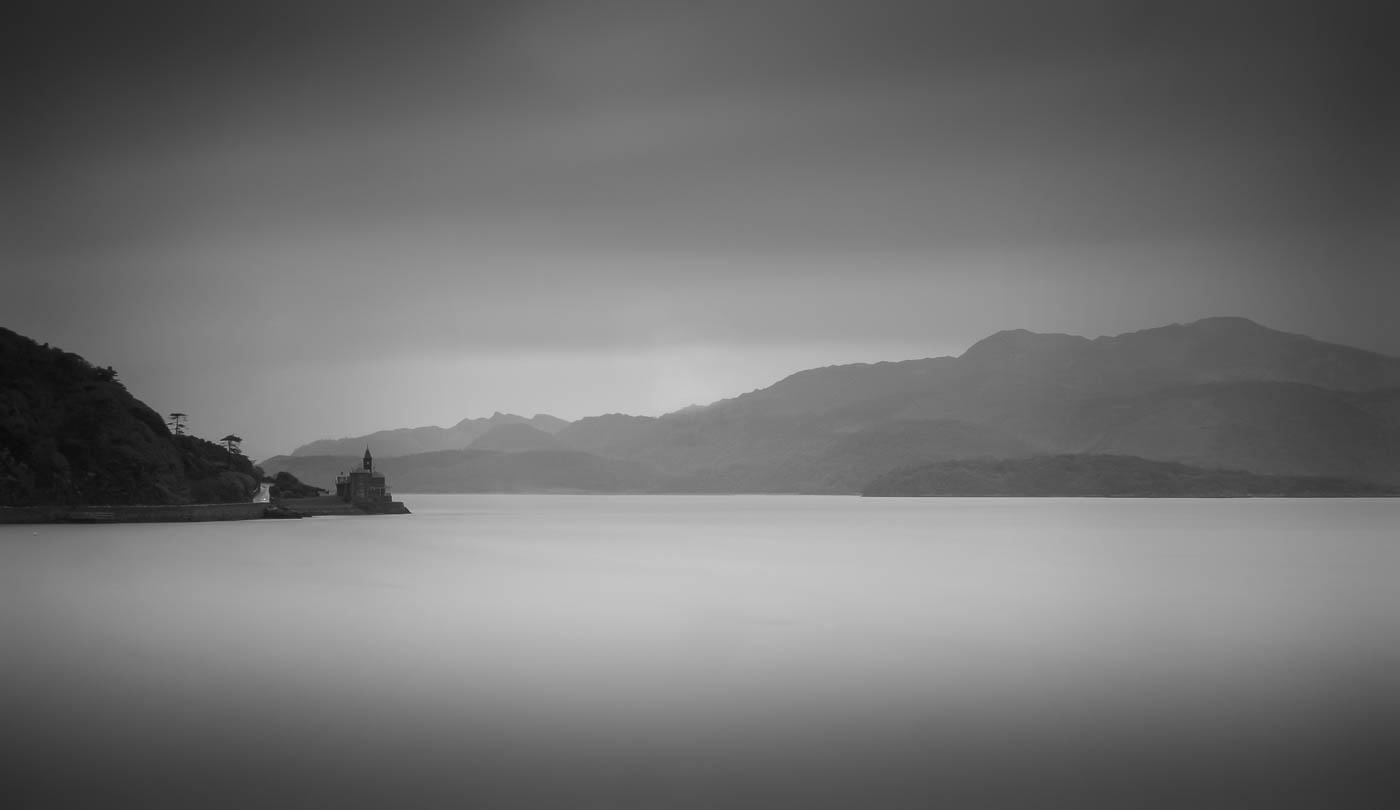 We then went back 5 miles north to the Llanbedr Waterfalls. They’re not dramatic but close to the road (ideal in the rain!) and made a nice autumn setting. Paul’s red umbrella certainly stood out! The secret with this kind of shot is to get as close to the water as possible with a wide angle lens; very useful in making things look bigger than they actually are! 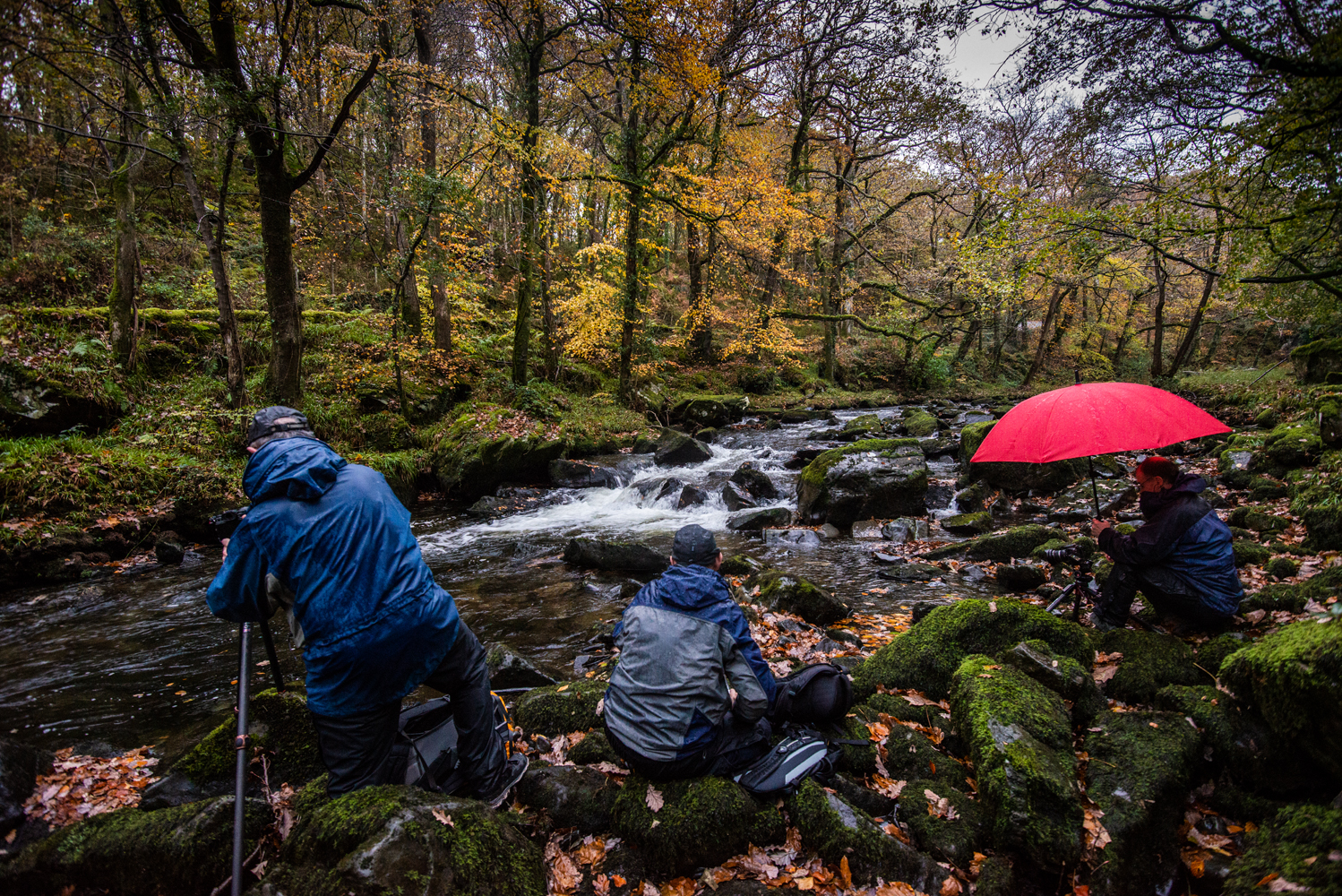 Finally we had a go at photographing a viewpoint overlooking Harlech Castle – it rained and they didn’t seem to turn the lights on at dusk so back on another day!!

We started at The Fairy Glen about a mile south of Betws y Coed.  The landowner does seem rather overenthusiastic about collecting here entrance money! Still, it’s a beautiful spot and well worth the 50p entrance and £1 parking fee! 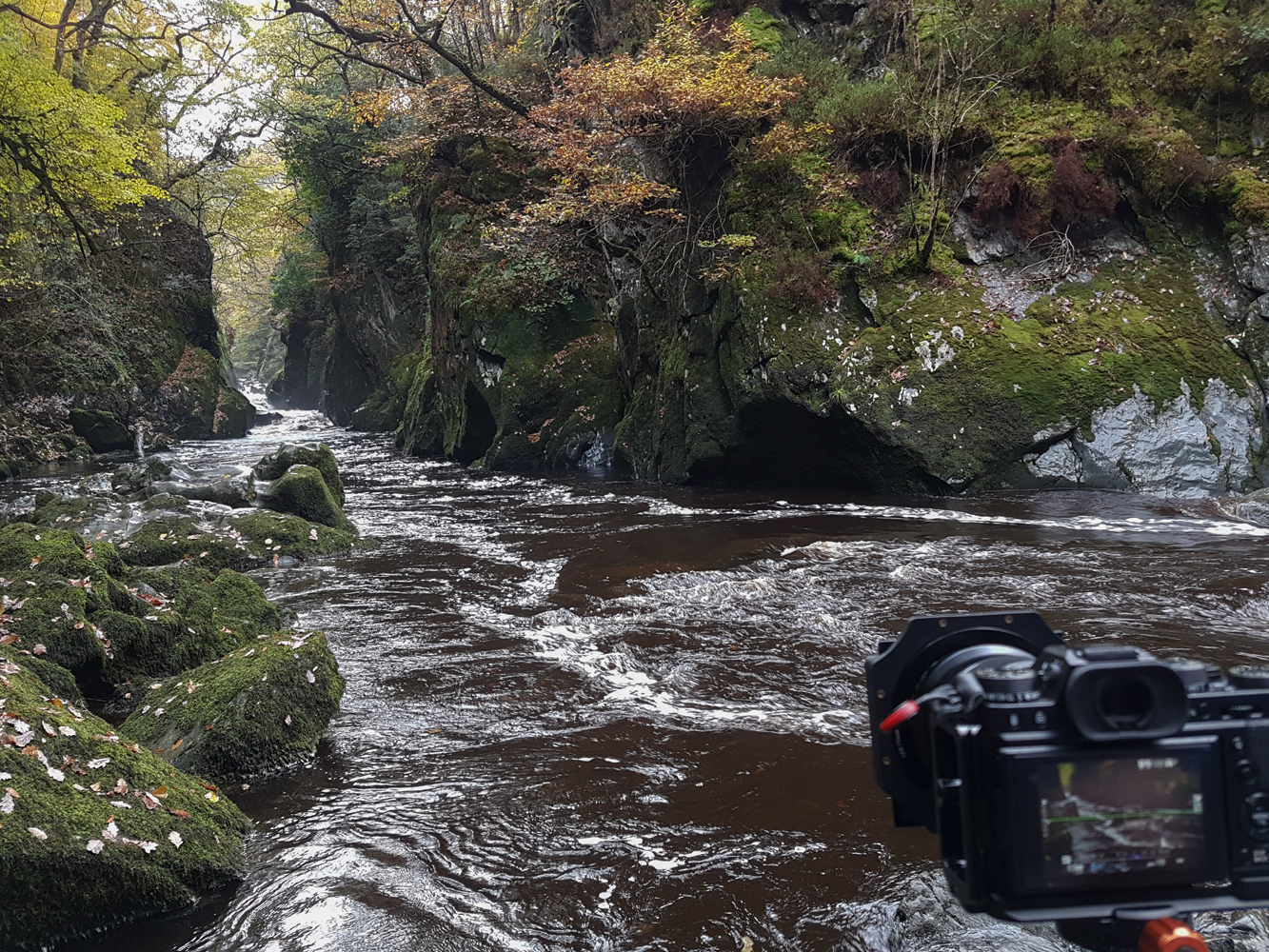 The Fairy Glen was around a 15 minute walk and we carried on with a gap in the rain! The usual shot is the one to the left, often best seen with light coming down from above. However, Graeme found a really strong composition by placing himself further back and using the frothy water as a part of the composition. Exposures of around 10 seconds seemed to work best. 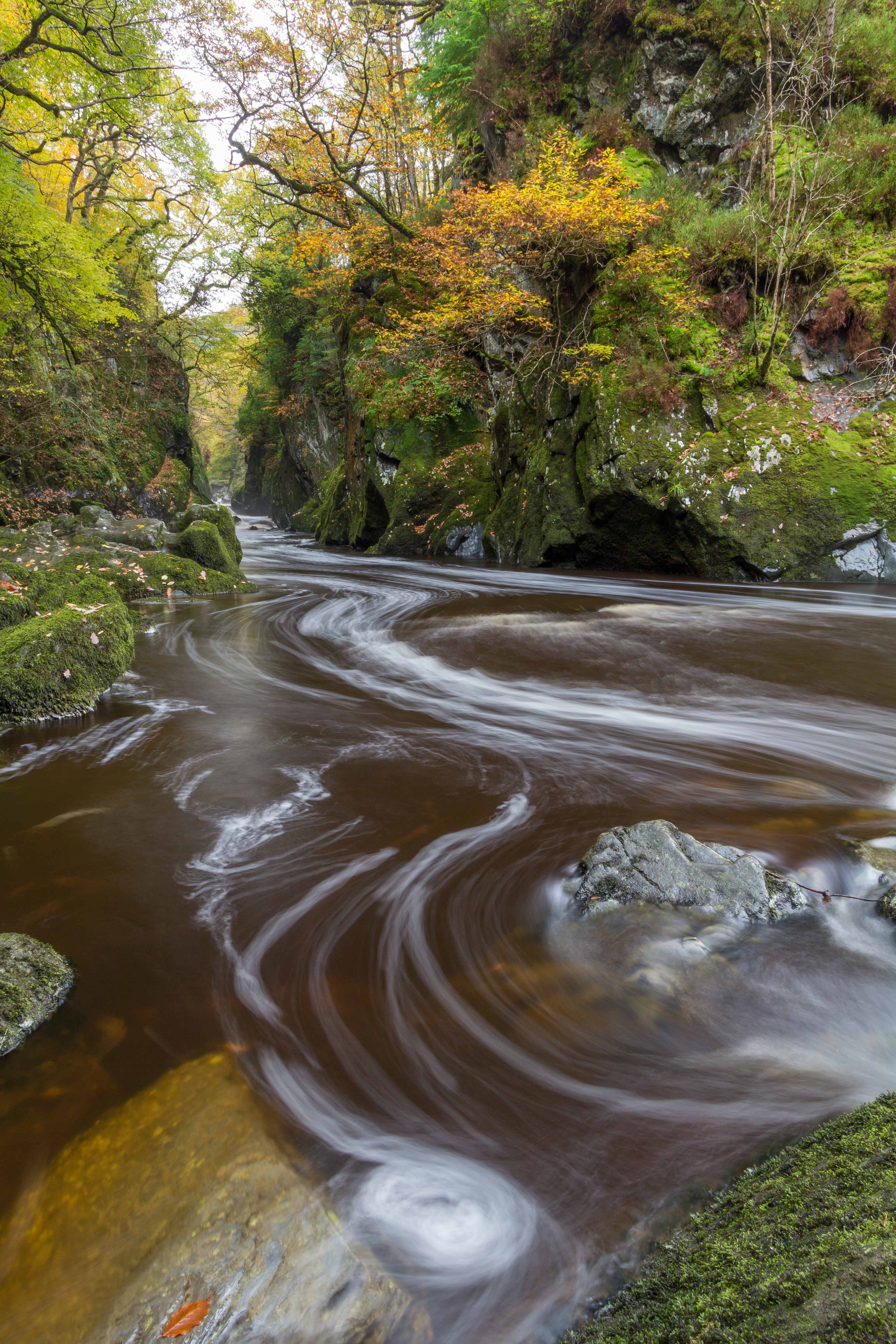 Paul’s image at The Fairy Glen captured the flow of water perfectly and captured the autumn colurs well in the rainy conditions.

An exposure of around 5 seconds using a polarising filter picked out the froth (usually produced by peat which also causes the brown colouring in the water after heavy rain.

It was shot using a 10mm lens on a crop sensor camera so gave a really wide angle of view. And accentuated the sweep of the water. A polarising filter is also essential for this type of shot to reduce the reflections and galre in the water Image by Paul Makin 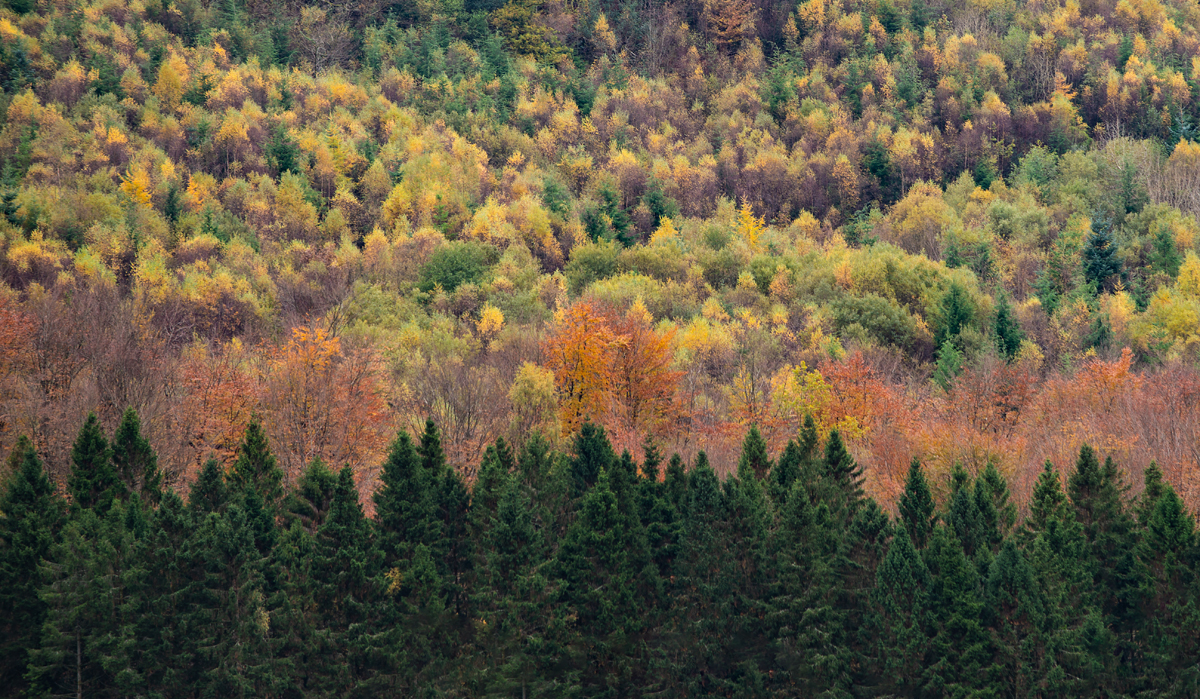 My image of the forest above The Fairy Glen 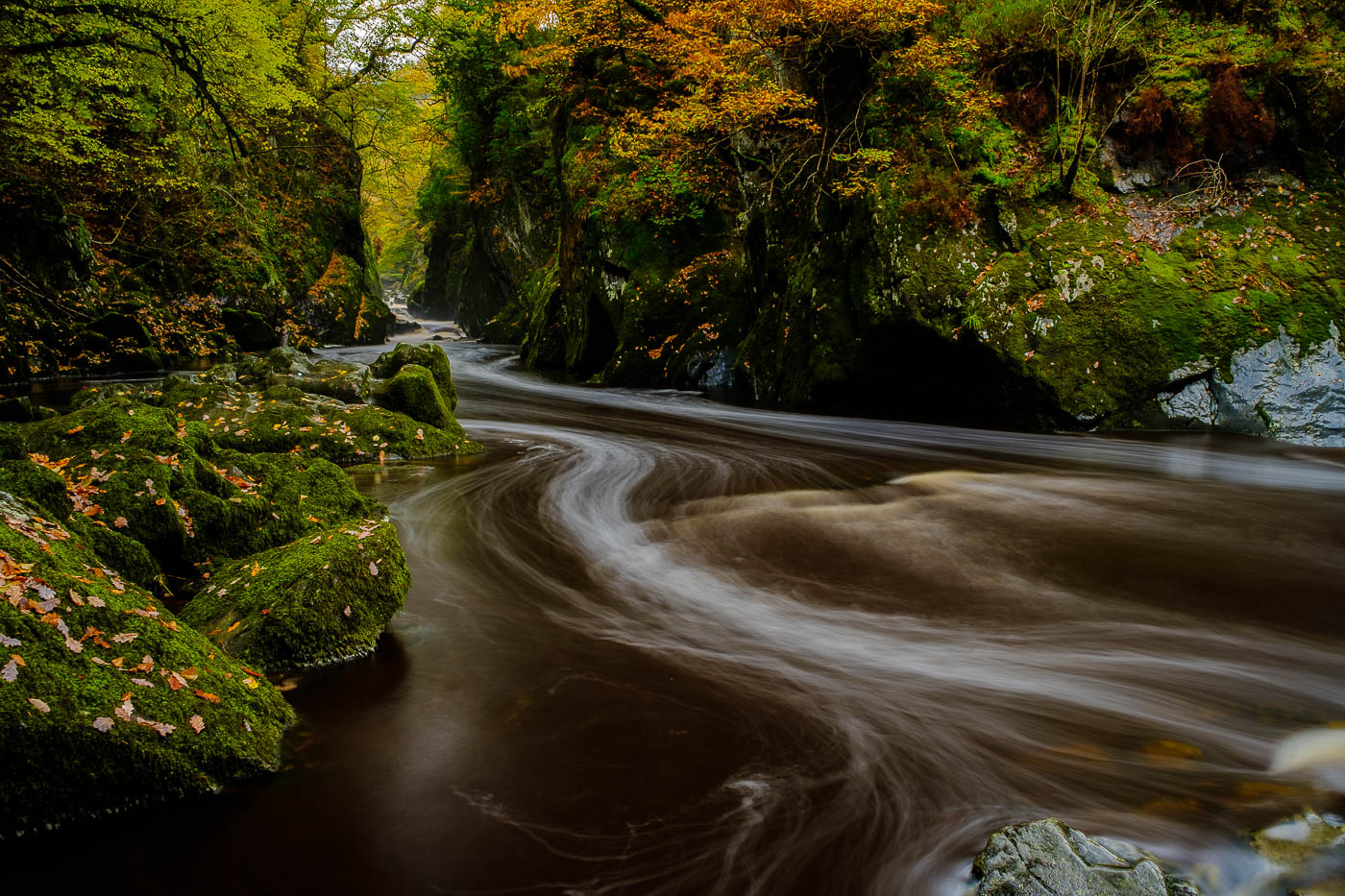 Image by Graeme Tozer of the Glen; we all got a shot if this but it was his idea!

Two more images from our short walk to The Fairy Glen. Both the Glen itself and the surrounding forest had great autumn colours.

We then moved on to the (photographically disappointing!) Swallow Falls. In truth more of a tourist trap with a fixed viewpoint and lots of water than a photographers location. Genenrally I find that cascades of water work best rather than big waterfalls – much more subtle!

A bit further down the river there’s quite a nice spot looking back to Betws y Coed though. In case you’re wondering why the sun came out this one was taken a couple of years ago! 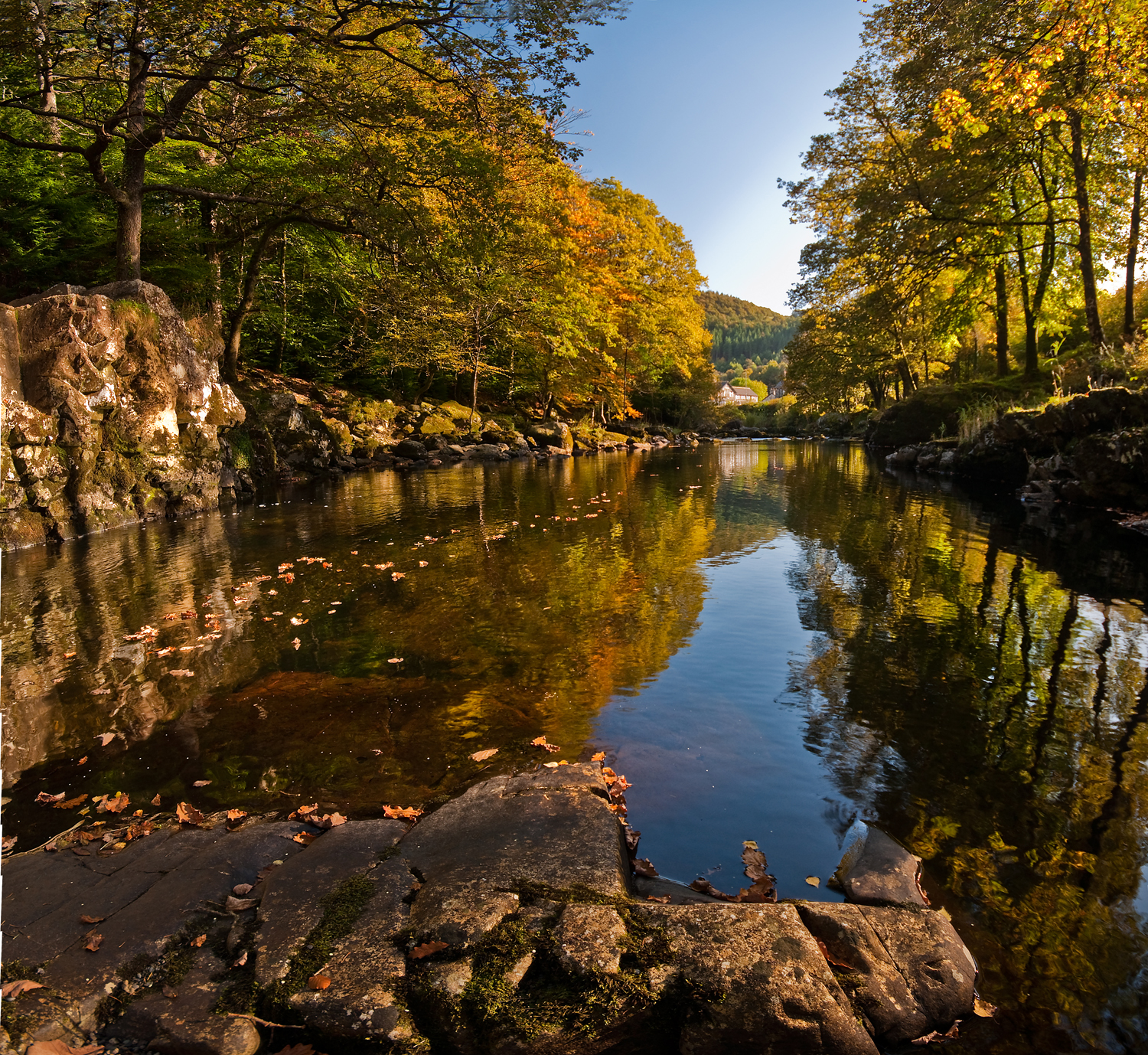 We were at the point of giving the day up as a lost cause but then drove over Llanberis Pass when we noticed a tree on the hillside. The grey, rainy conditions suited this pretty well. There was some good forteground features, a great mountain backdrop, and the light brought the autumn colours out well. One of those spots you don’t plan for but just come across! 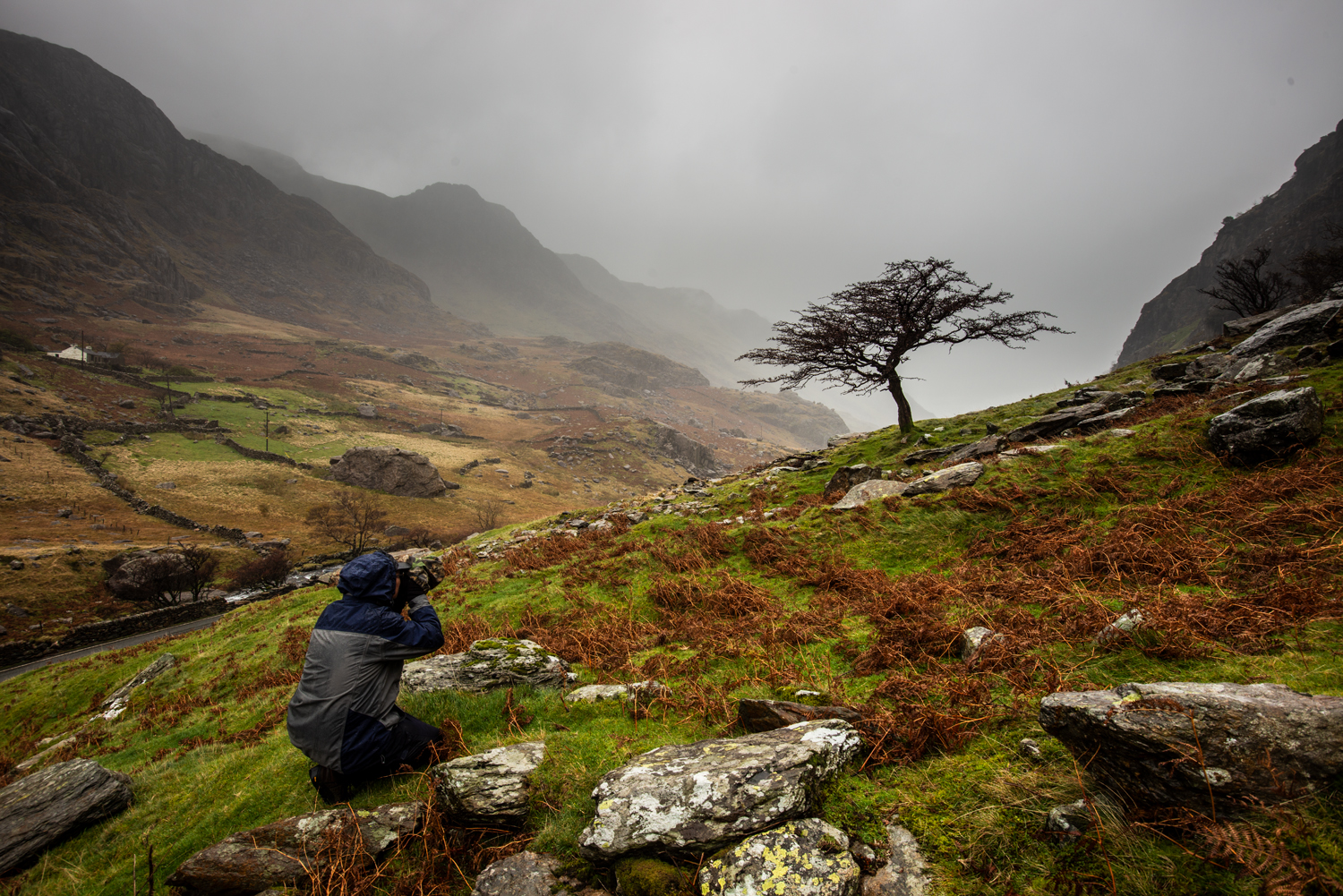 Keith capturing the single tree. The only difficult thing was keeping the lens dry for a moment as the rain was pretty persistent! This type of shot needs careful attention to the foreground and the positioning of the tree in the frame. The silhoutte effect can also be good in monochrome. 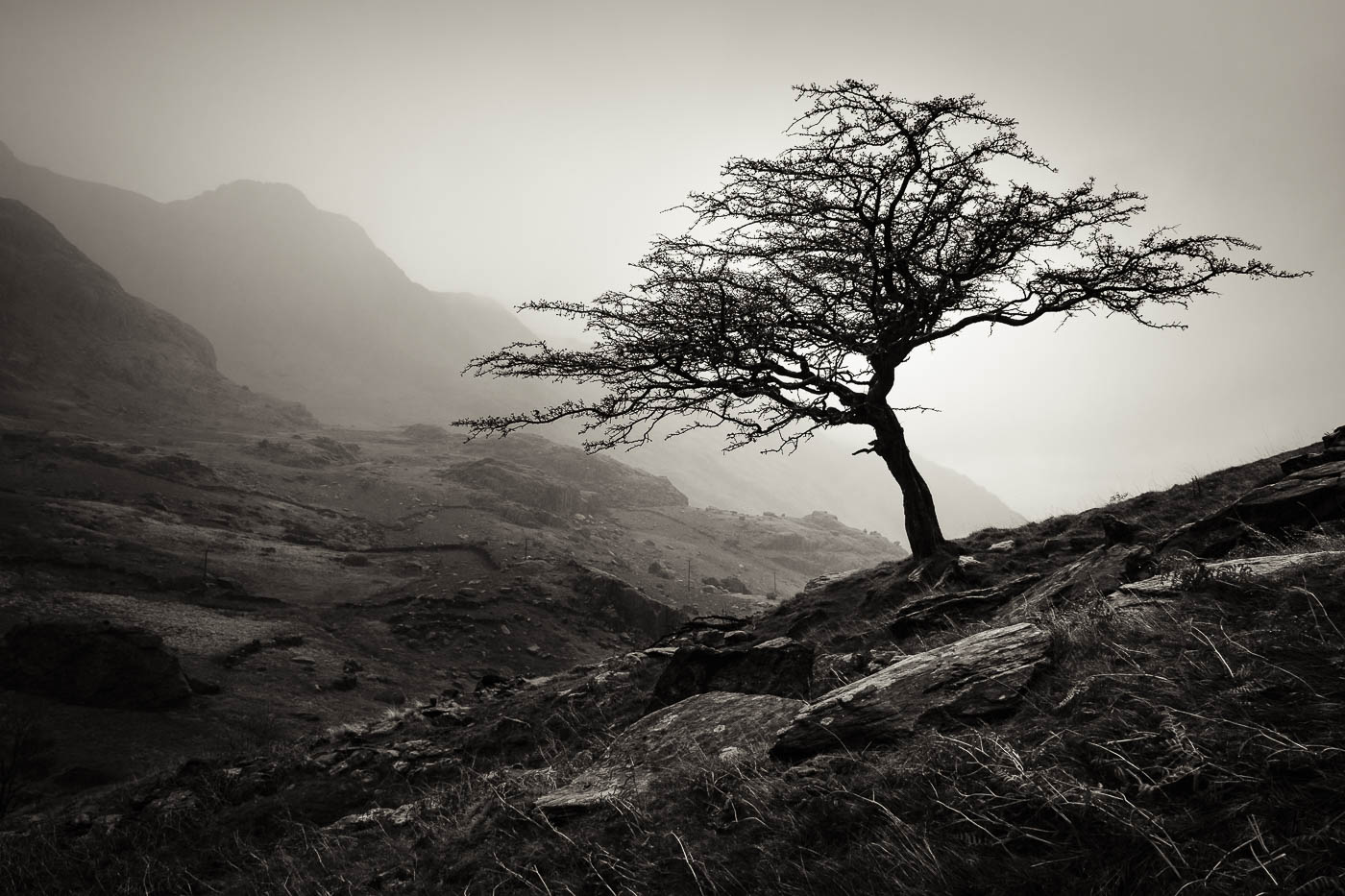 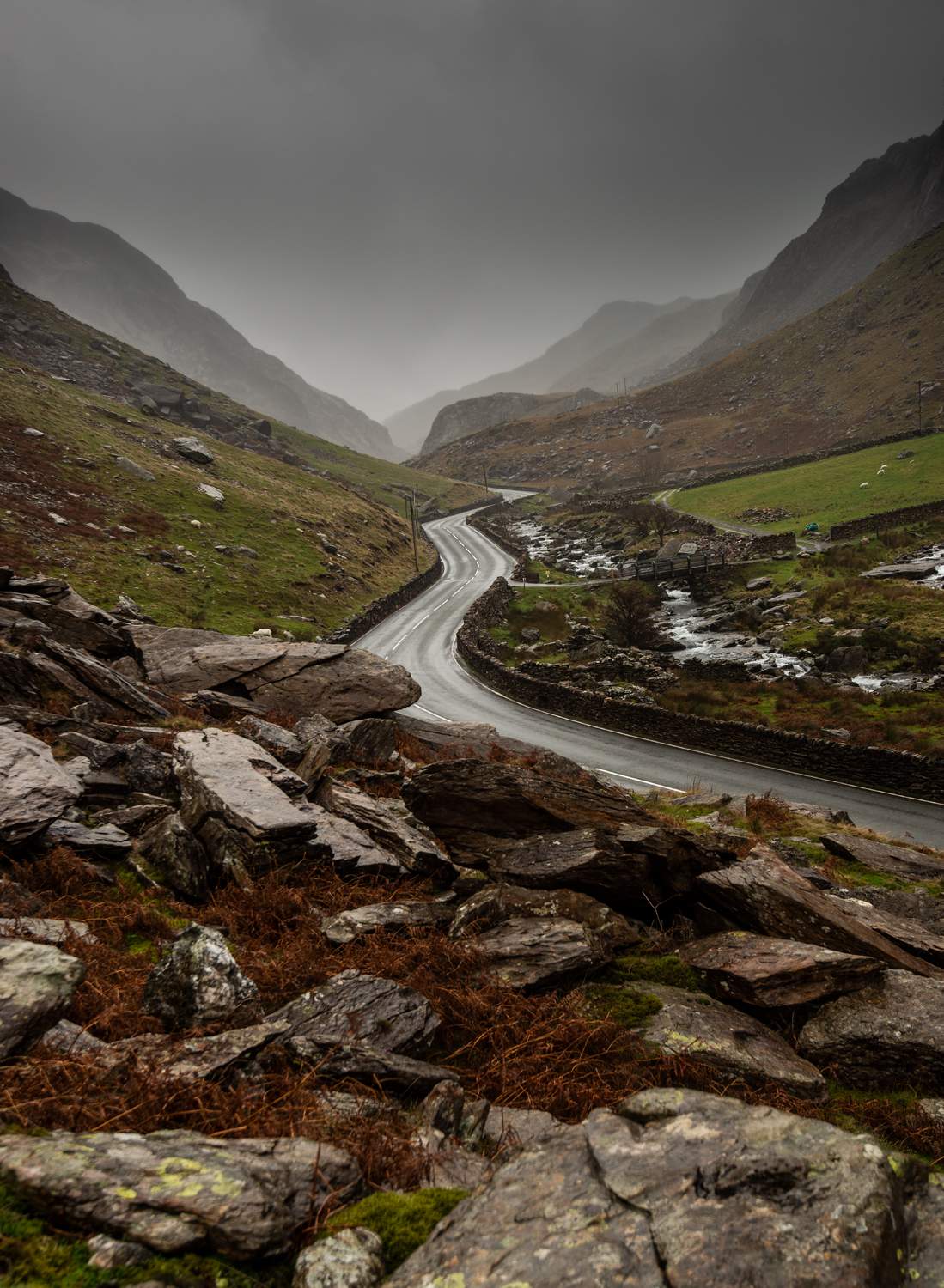 Image by Graeme Tozer – Graeme captured the tree perfectly in monochrome. It would have been nice to try a long exposure shot but there was no chance in the rain 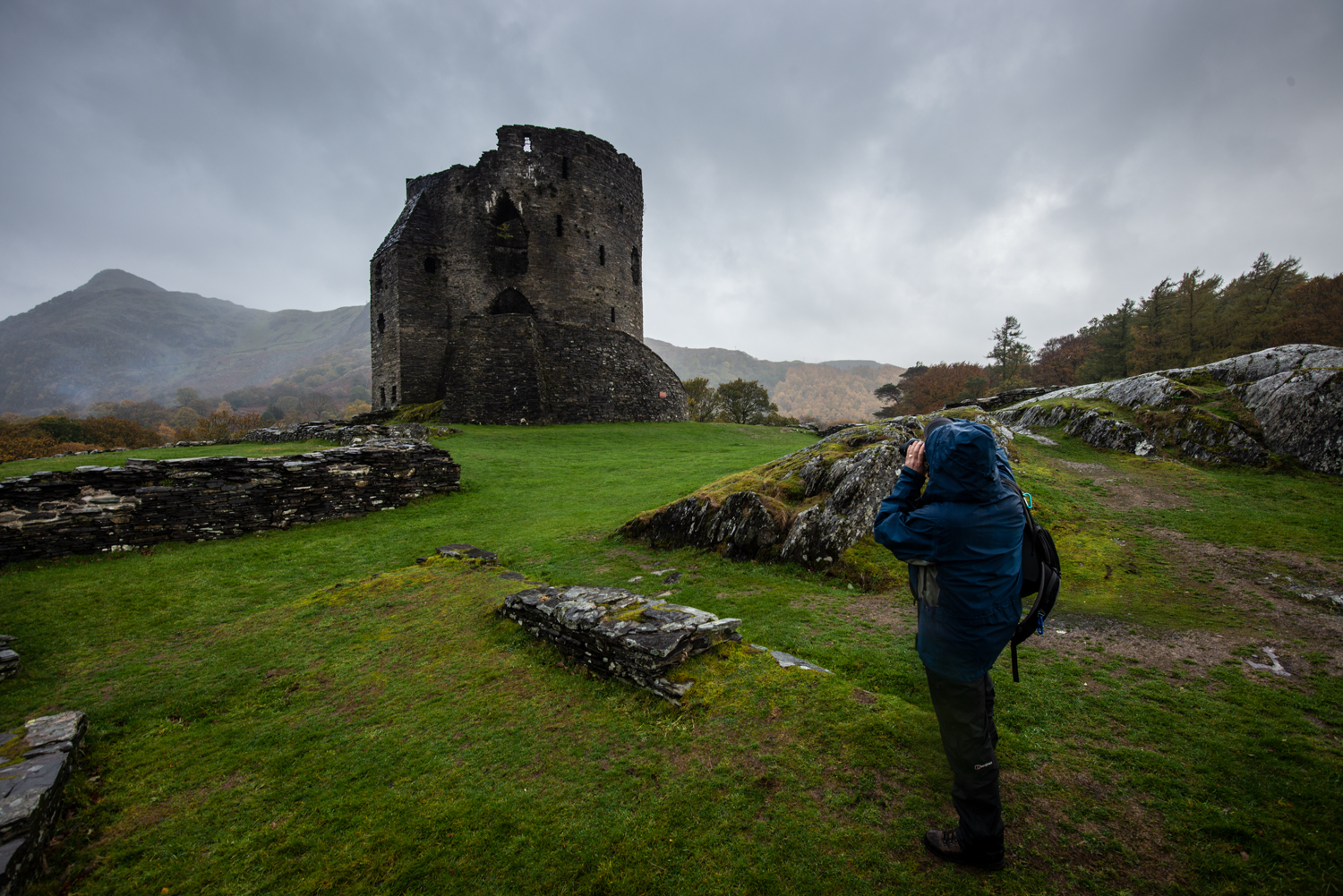 Paul making the best of the weather at Llanberis Castle

We then went on to probably the world’s most photographed tree! The tree at the end of Llyn Padarn just past Llanberis seems to crop up everywhere but well as we were passing it had to be done! But of course it was still raining! Perhaps the biggest surprise was that for a change there was no-one else there! We didn’t get the greatest shots….! 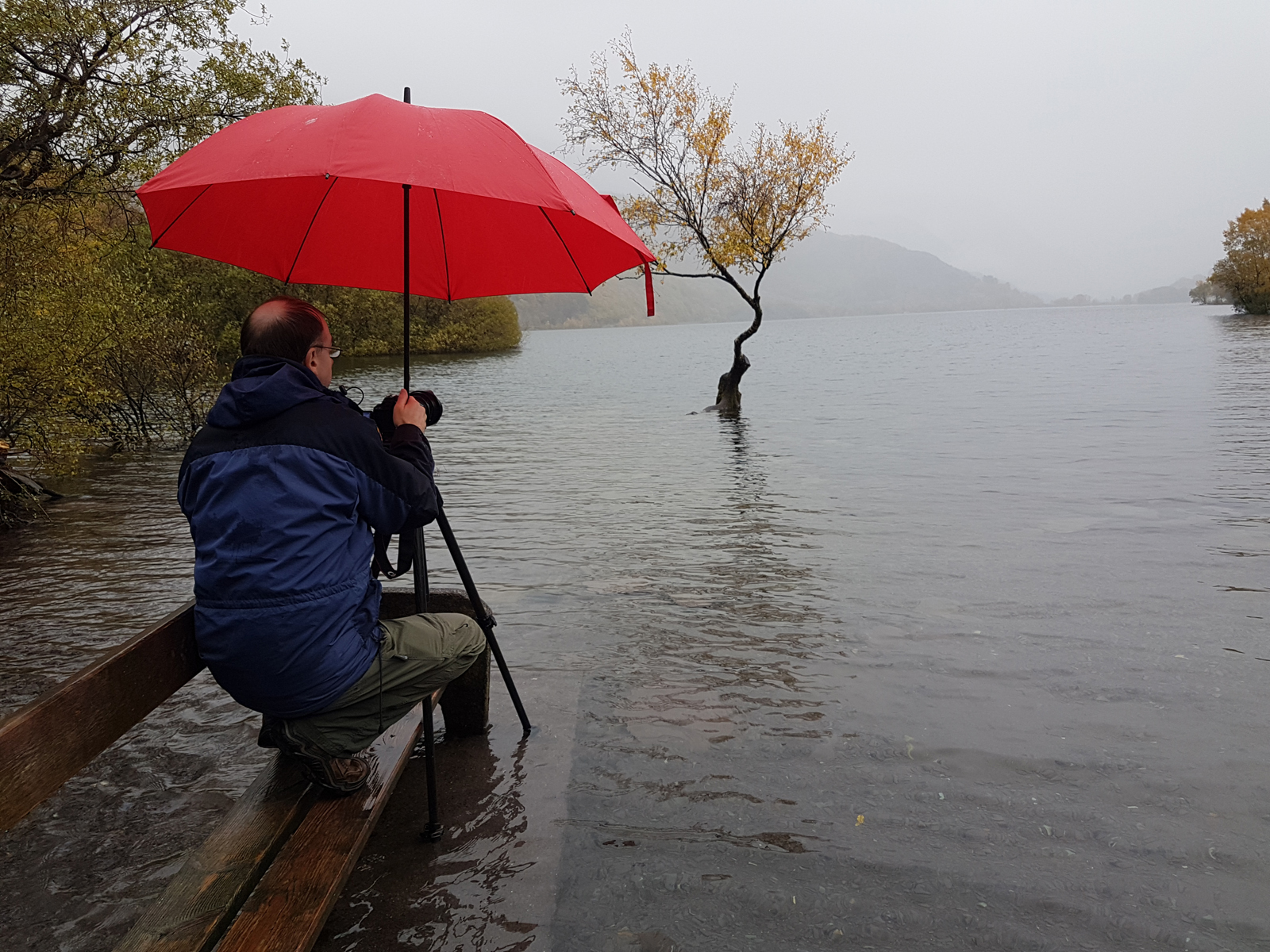 I should point out that we went here when we were passing. I do try to encourage clients to explore with the camera rather than go to familiar viewpoints. It’s a great spot but is a composition that has become simply a technical exercise rather than encouraging creative thinking!

Finally for the day we moved down to Caernarfon Castle. At least we were guaranteed some night shots as it’s always lit after dark. The following day there was a firework display over the castle which would have been nice 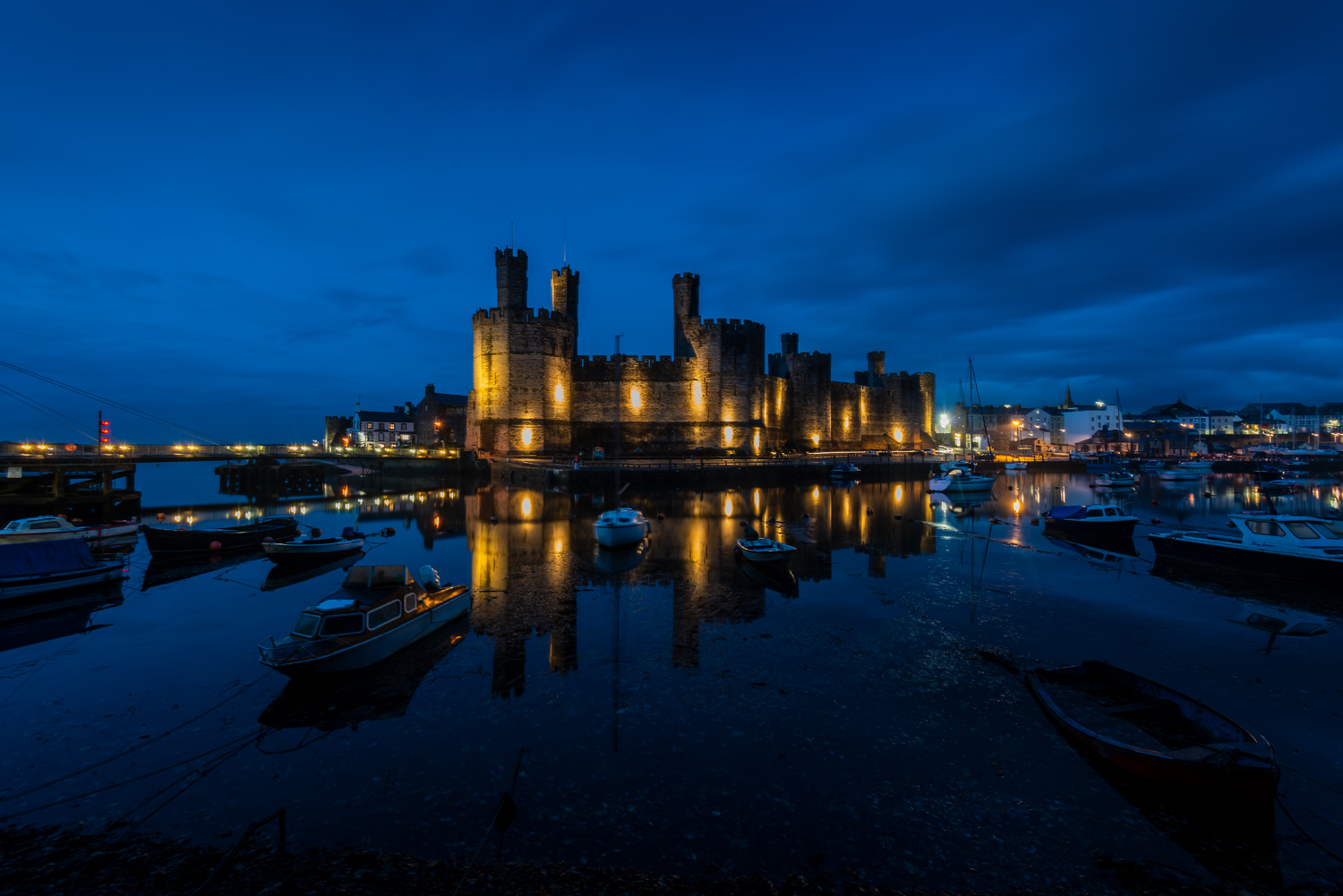 My shot at Caernarfon Castle: 16mm lens, f11 30 sec exposure
The best views of the castle are from the opposite side of the river. Make sure that you arrive when the side is high or at least coming in as you won’t get reflections when the tide is out. We were where in the evening; the sun set directly behind us so this would be worth coming back to for a dawn shot with sunrise behind the castle (however I’m not sure that they keep the lights on all night!)

Blaenau Ffestioniog is a fascinating place; certaintly pretty unique in the UK. It was built for the slate miners and is completely surrounded by old and working mines, with slate spoil dropping down to the roads and houses. We went to a look around to see what was there (with little planning apart from a map!) and ended up at an interesteing spot called Cwmorthin. With it’s remote reservoir built for the slate mines. It was a still morning so great for reflections. 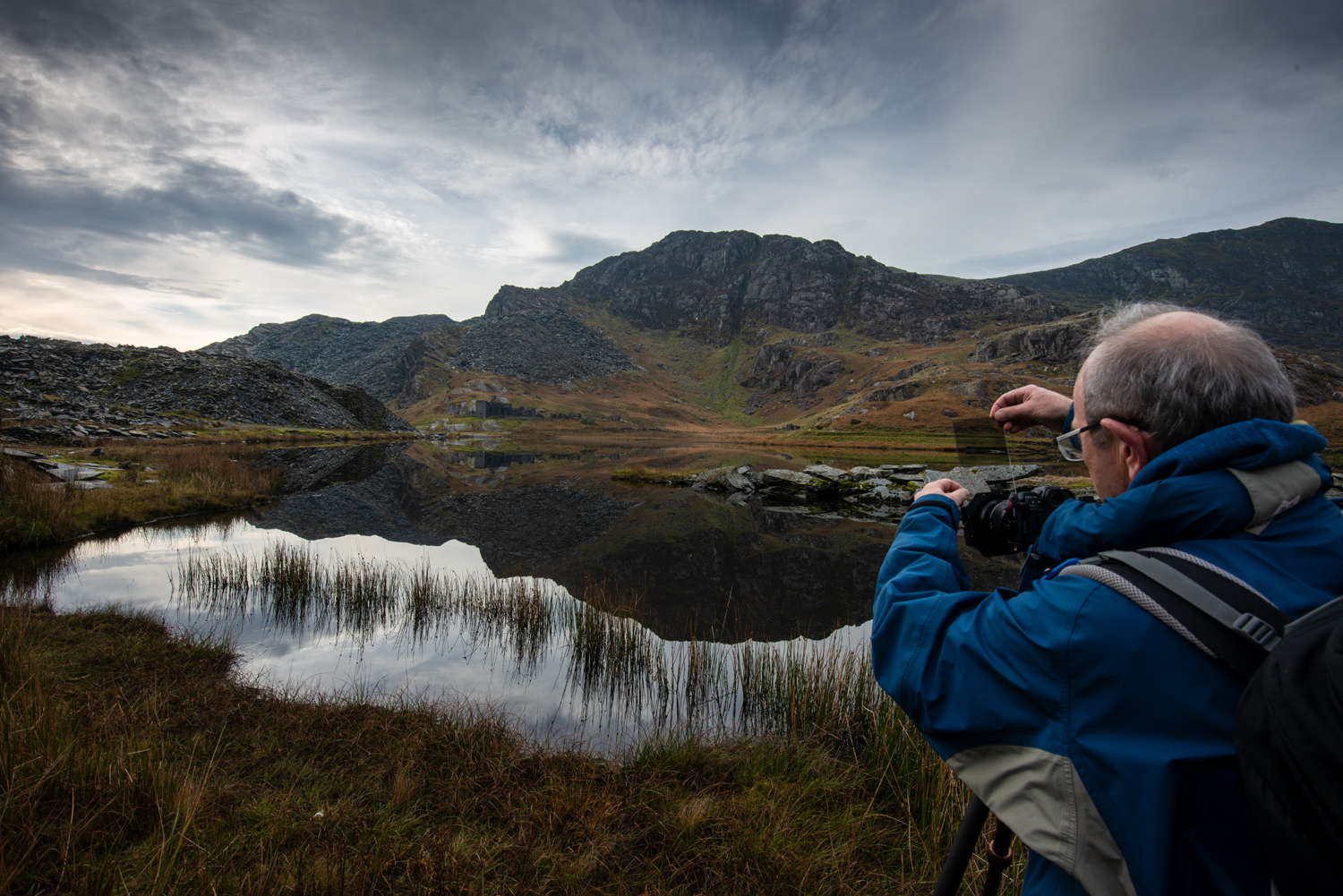 Lilies in the reservoir at Cwmorthin Quarry

It was a perfectly still morning so while lacking exciting light there were some great reflections.

The image above is almost abstract with the mirror image and is best with the sky cropped out. Generally the sky tones will detract from the pattern.

The image o the building on the left has a very low point of view on the water in order to get a reflection of the ruin. A graduated ND filter is essential for this type of shot against the light. 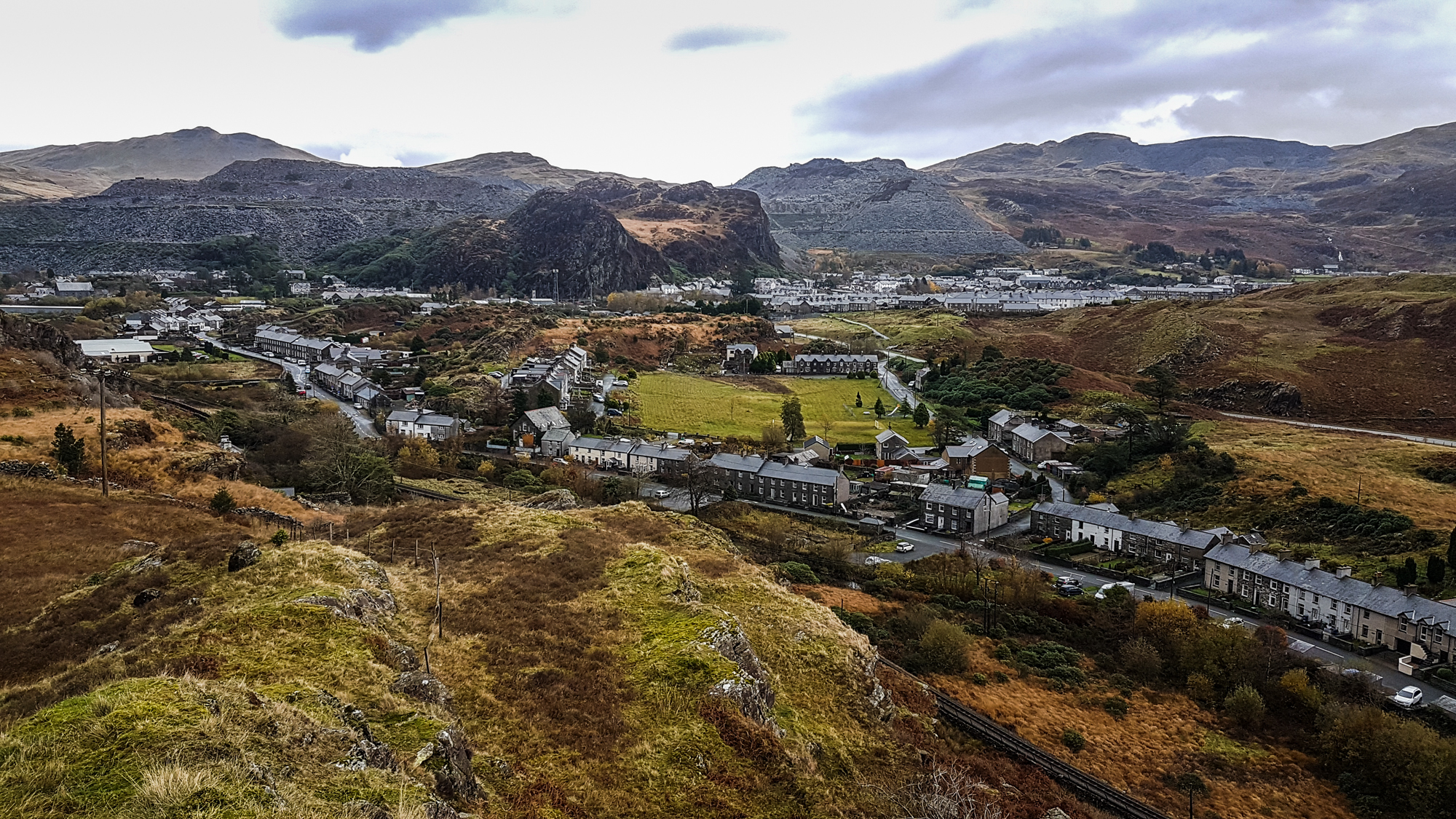 A phone shot of Blaenau Ffestiniog – hence the blown sky!! 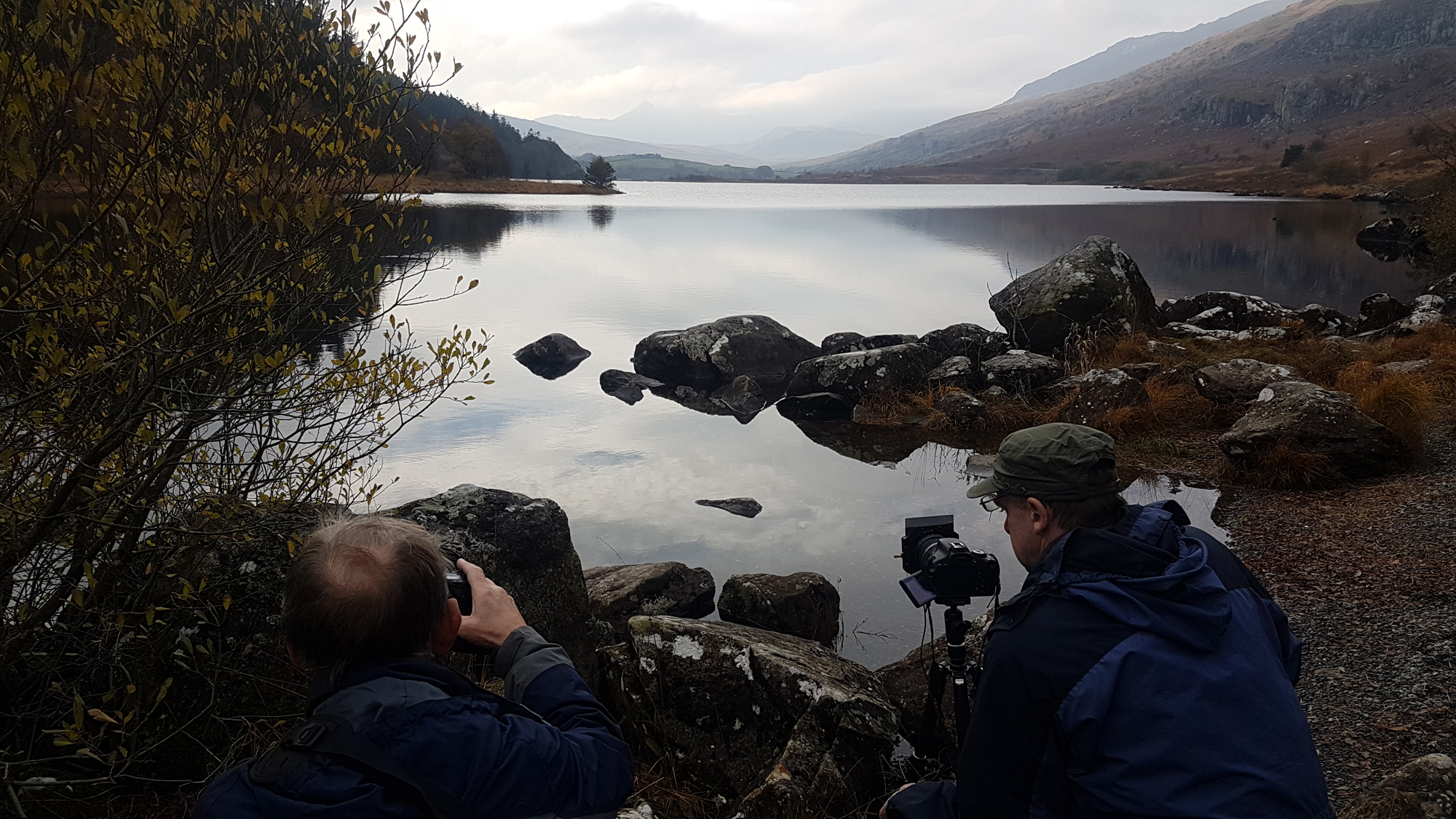 Graeme and Keith at Llynau Mymbyr near Capel Curig

On the way to the Glyderau in the heart of Snowdonia, we stopped off at Llynau Mymbyr with great views towards Snowdon. This is a pretty good spot for a monochrome long exposure shot; we’d tried it in the rain the previous day with no luck but conditions were better today.

The secret to a good shot here is the careful positioning of the rocks and being very precise on the height the image is taken from; therefore how much water to reveal in the image.

We then tried (a hopefully drier!) revisit to the Glyderau area of Snowdonia and at last caught a little sunshine! After quite a lot of walking around we found a spot overlooking Tryfan from Afon Lloer on the opposite side of Llyn Ogwen and waited while the light changed.

The two finished shots illustrated are both Graeme’s; I particularly like the monochrome one. A wonderful flow through the image and perfectly executed!

Finally the red glow in the wispy cloud after sunset made the 2 hour wait in the same spot worthwhile (just!) 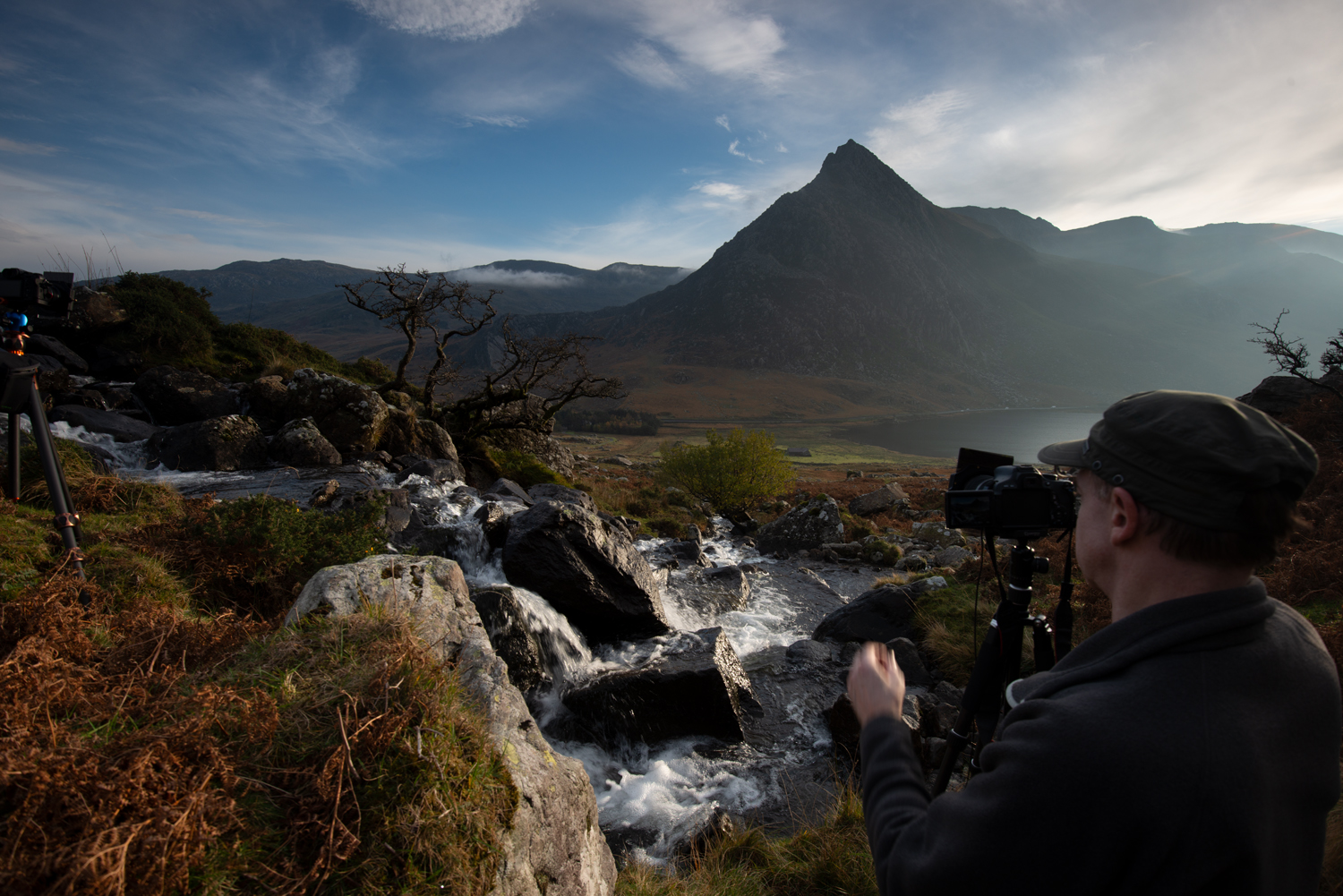 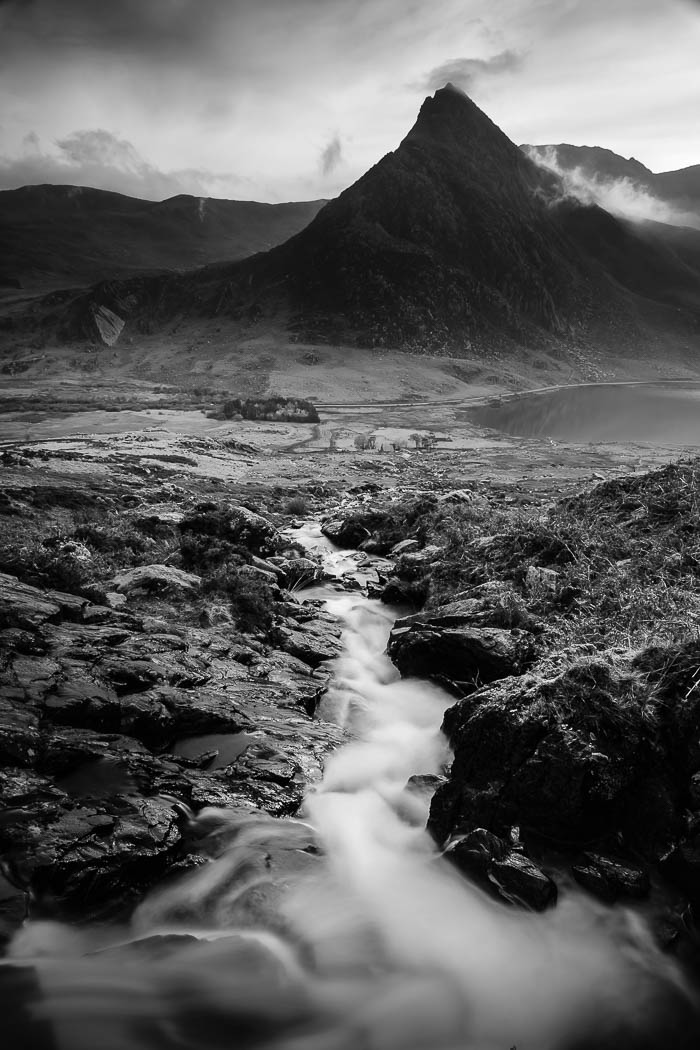 Graeme captured the flow of Afon lloer leading the eye to Tryfan perfectly in this image. A long exposure has smoothed out both water and sky, picking out both Tryfan and the rocks perfectly. 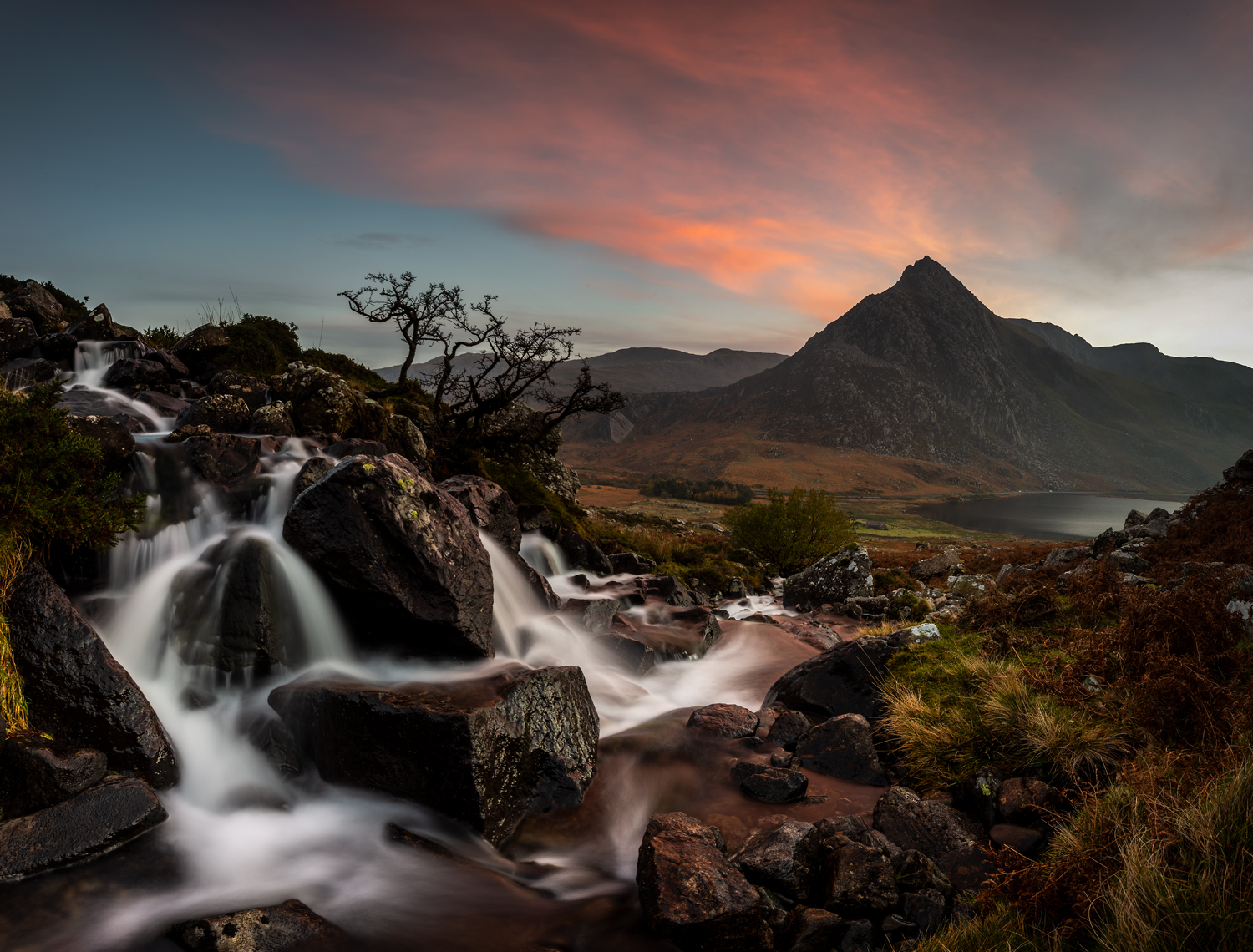 With this image, see how the red colour from the sky is reflected in the stream water. This was the only position on the hillside where we could get a flow of water facing the camera and looking towards Tryfan. This was the only sunset (or sunrise!) we got on the trip.

This day started very wet but dried up into a pretty good day. We stopped off at the base of Llanberis Pass overlooking Cwm Gwynant. The time was spent looking at foreground features and the beautiful golden autumn colours in the landscape 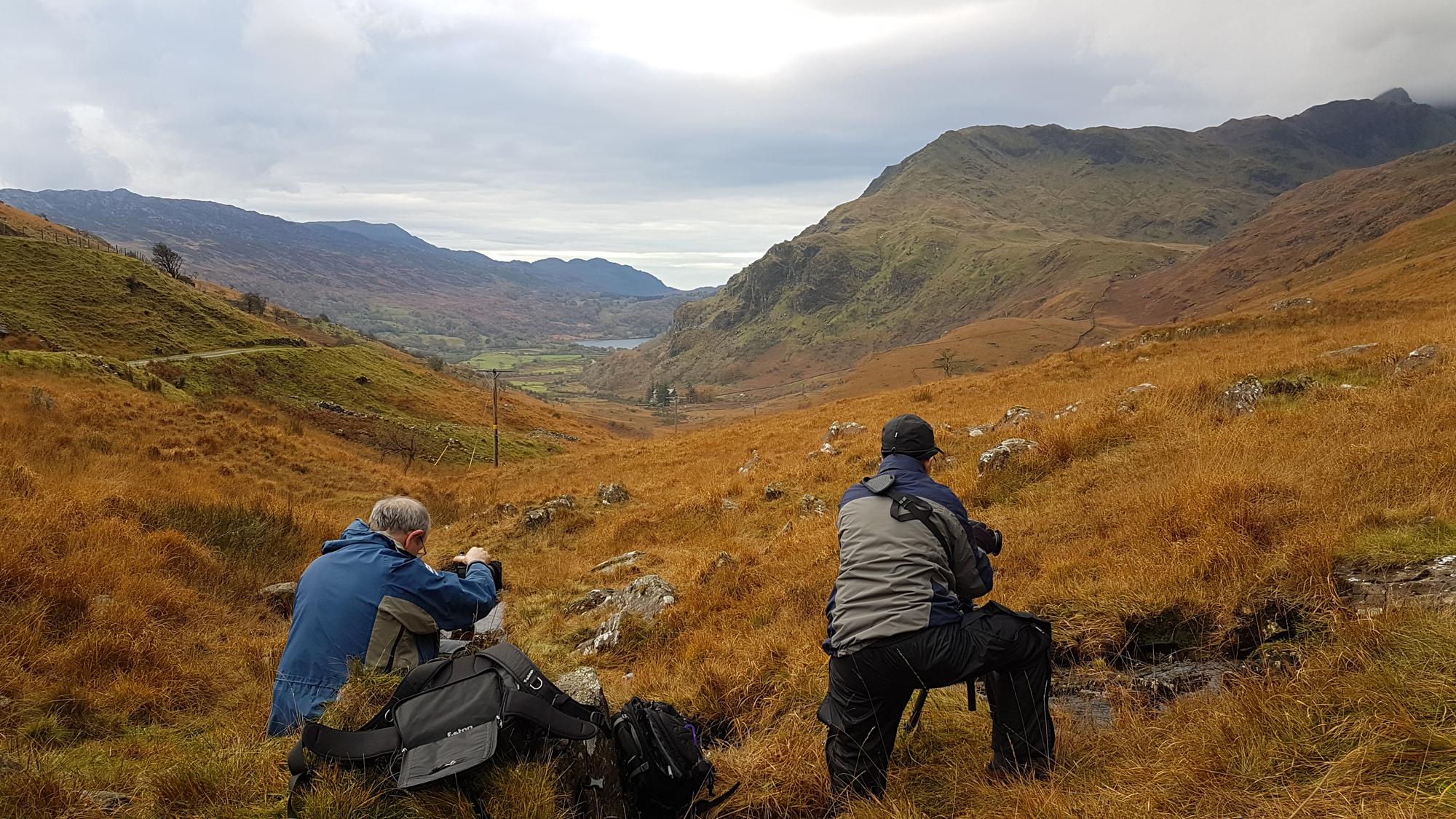 Graeme and Paul setting up at Cwm Gwynant 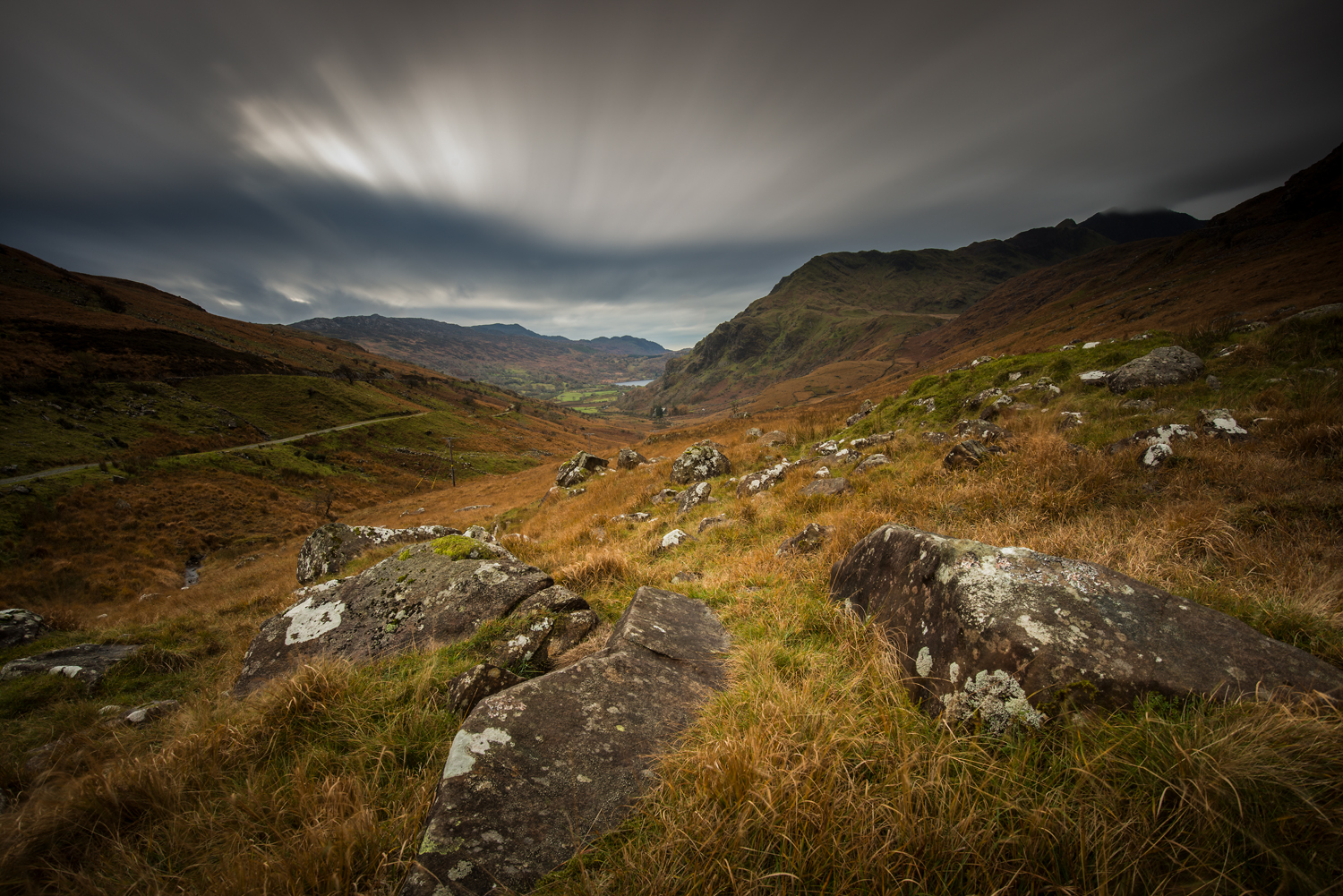 I had a go at a long exposure shot – I’m not sure how successful the cloud movement was though!

At this point Graeme left us for another engagement so Keith, Paul and myself went on to Cwm Idwal beneath Y Garn. 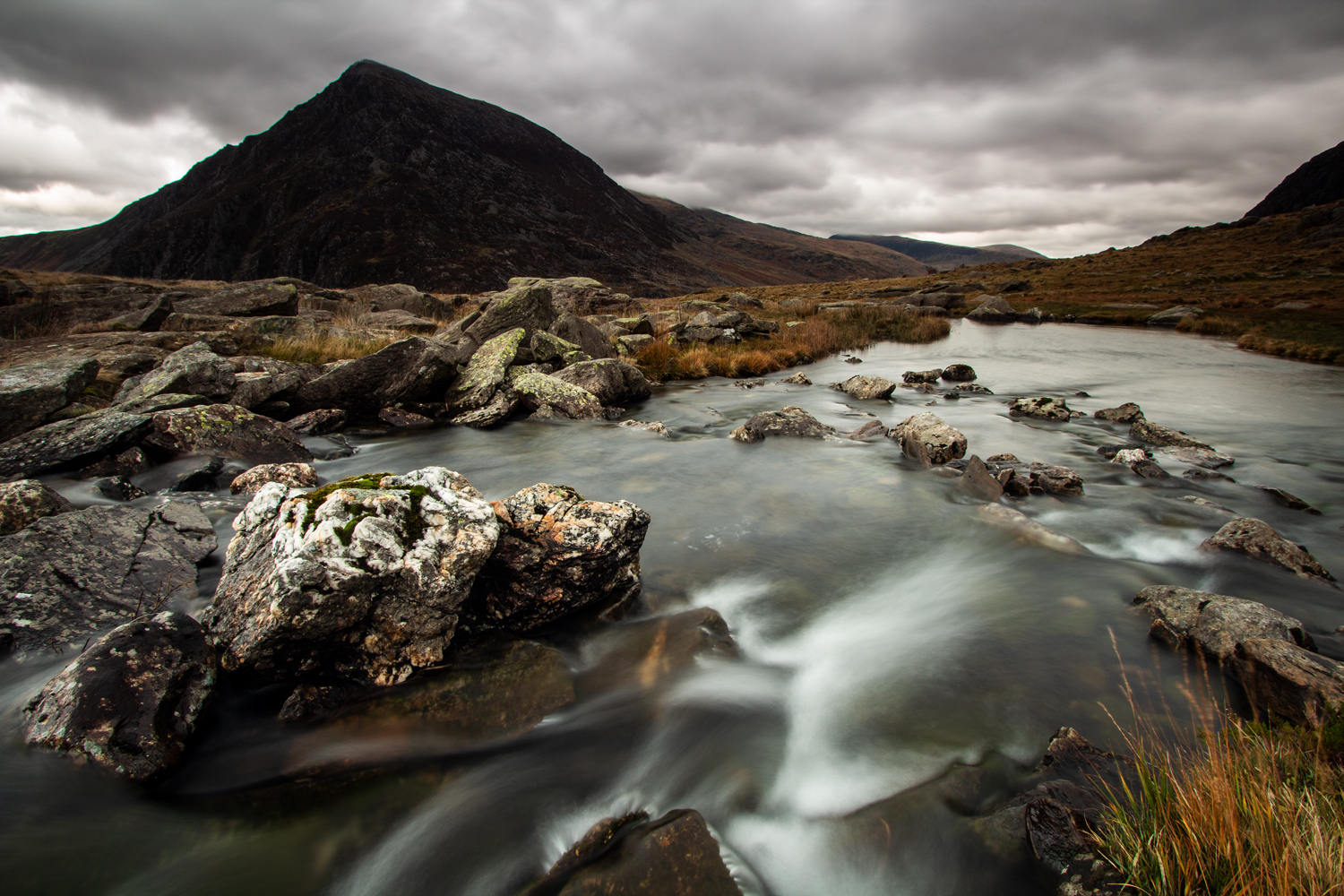 The cloudy and (relatively!) dry weather suited this scene well and Paul got the shot above using a 10mm lens and 3 second exposure. With this kind of shot make sure that you use a short enough shutter speed to prevent slight cloud movement; in general cloud movement should look deliberate not accidental!

On the final morning, Paul and I went to Ynyspandy Slate Mine not far from our Farmhouse; entirely by mistake as I took the wrong turning from the farmhouse gate! But it was a fortunate error otherwise we wouldn’t have found it! On the less positive side we just missed some great light; it was only for 20 seconds or so but happened when we were moving from one spot to another (we’d been waiting for an hour or so for the light to happen). There’s a moral in that somewhere! 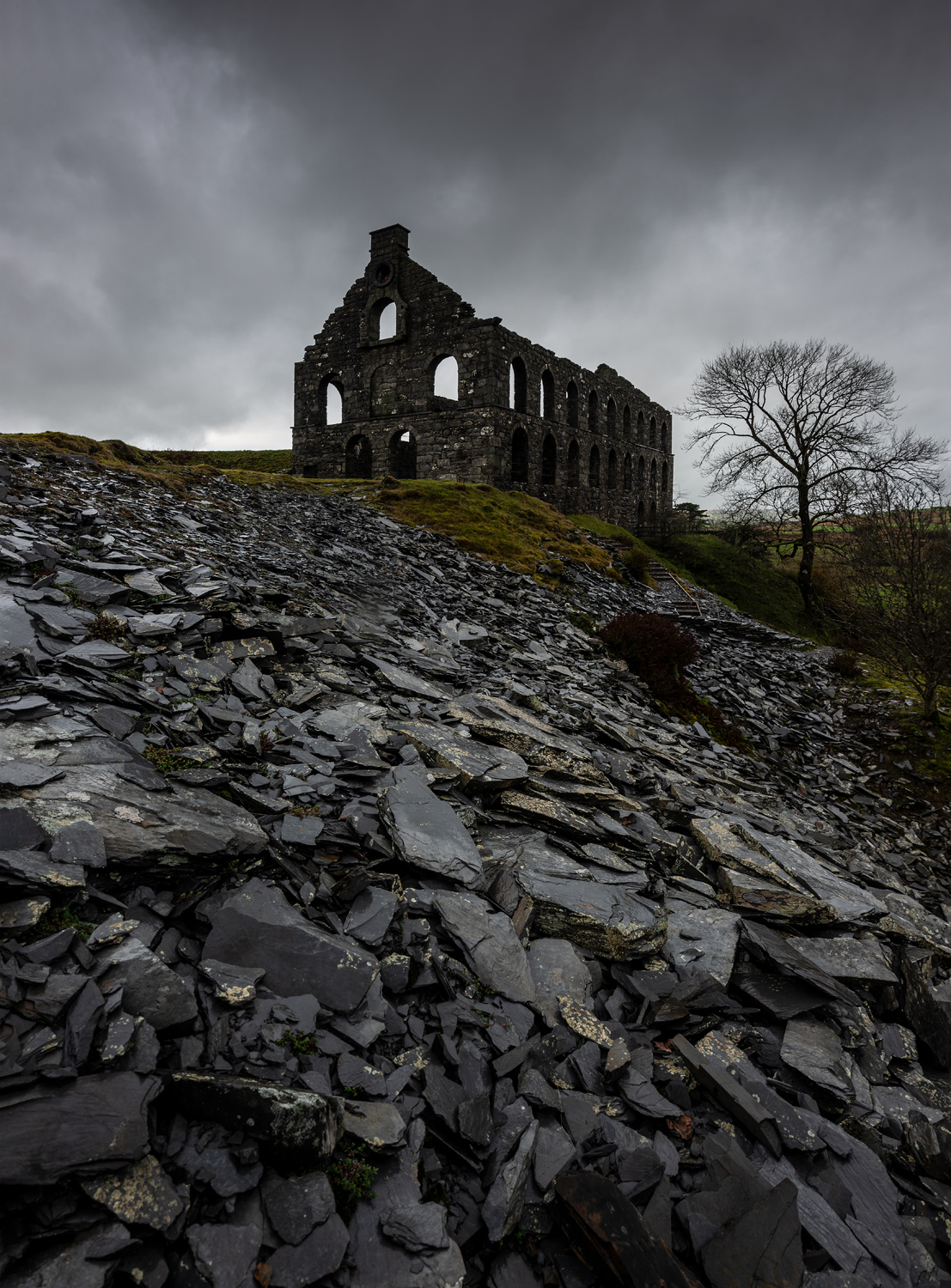 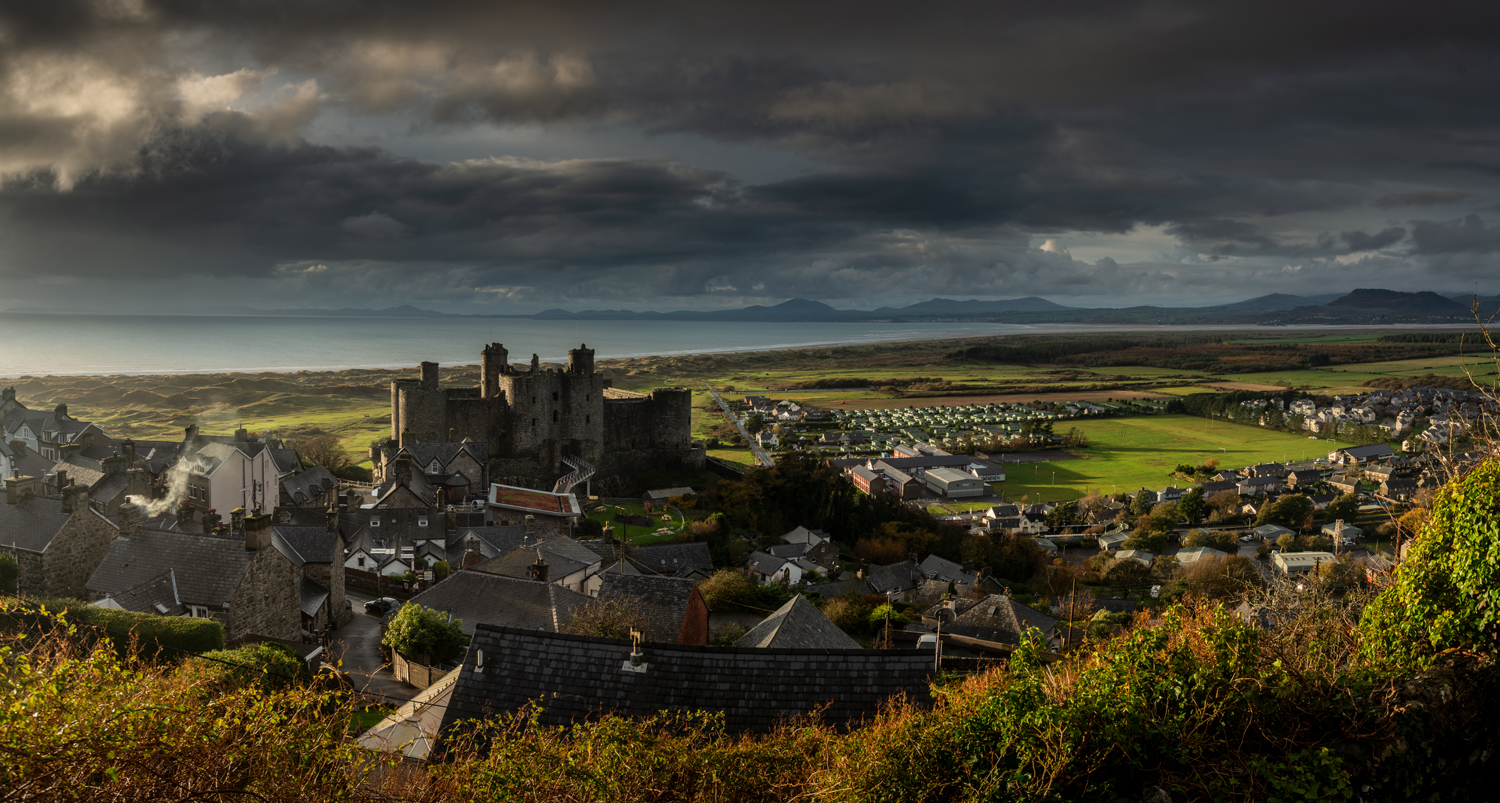 Finally, thanks to Graeme, Keith and Paul for booking onto the workshop – it was great to have your company and we did OK despite the rain!

As you can see, we didn’t have the greatest of weather; but you’ll return with some great images whatever the conditions! If you’d like to Book a Snowdonia Photography Workshop in the stunning Snowdonia National Park, please Contact Me for further details.