The jurassic Coast in dorset is a fabulous part of the world so i thought that it was about time that I added it to my schedule of photography workshops!

This is my account of my September workshop; I went up on the Fiday and conducted a weekend workshop on the Saturday and the Sunday. We explored the Jurasic coast from Corfe castle at the eastern end to Portland Bill to the west. We had a mix of clear skies, rain and showery weather so overall some varied weather for photography!

So with thanks to Debbie, Jon, Doug Sheila, Andrew and Steve for your company and for your images, here’s my blog of the weekend. 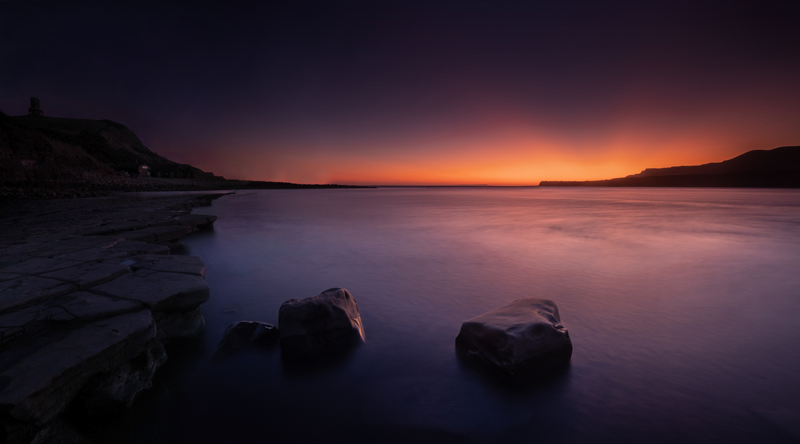 Before I met with the group, I visited a couple of places on the Friday before. I went to both Portland bill and Kimmeridge Bay. The best outcome was a great colourful sunset at Kimmeridge bay. it also allowed me to check out a couple of decent spots to take the group.

We arrived on a clear morning at Corfe Castle with a bit of colour in the sky. We found that the best spot was about half way up the hill opposite from the castle as it created a striking silhouette. From the popular spot atthe top of the hill, it becomes lost in the background 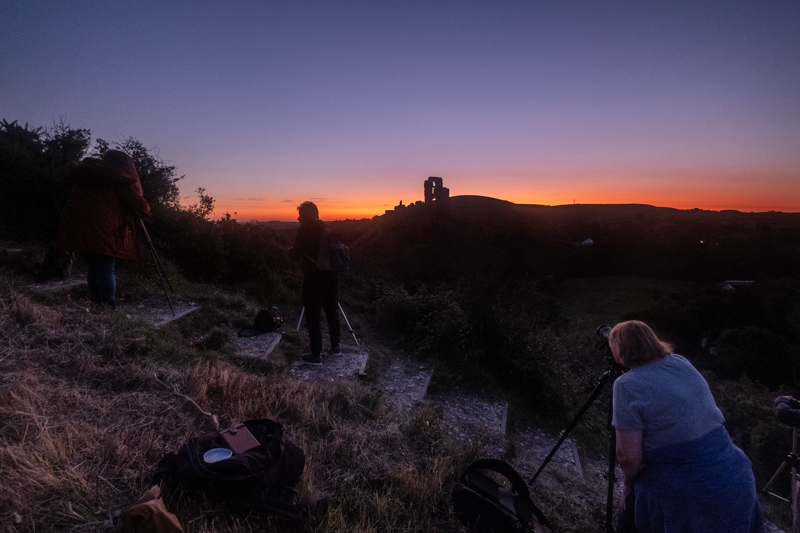 A rather smudgy picture taken of the group on my phone! 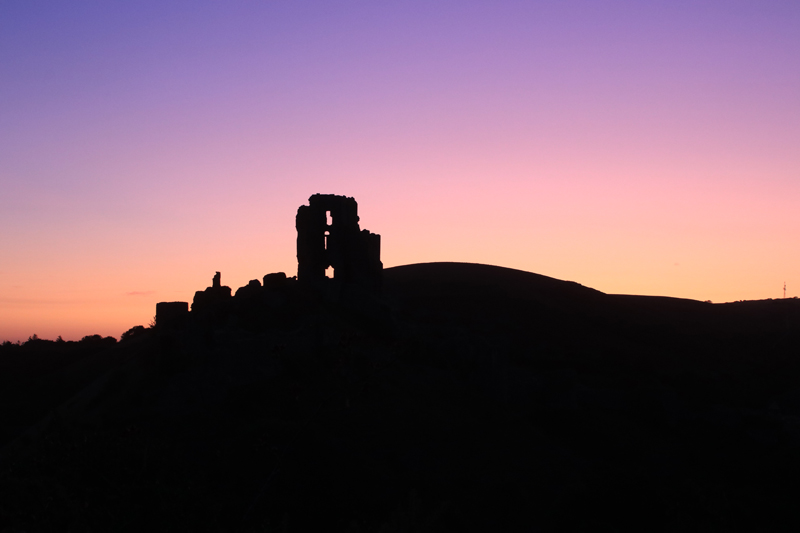 Steve’s silhouette of the castle. 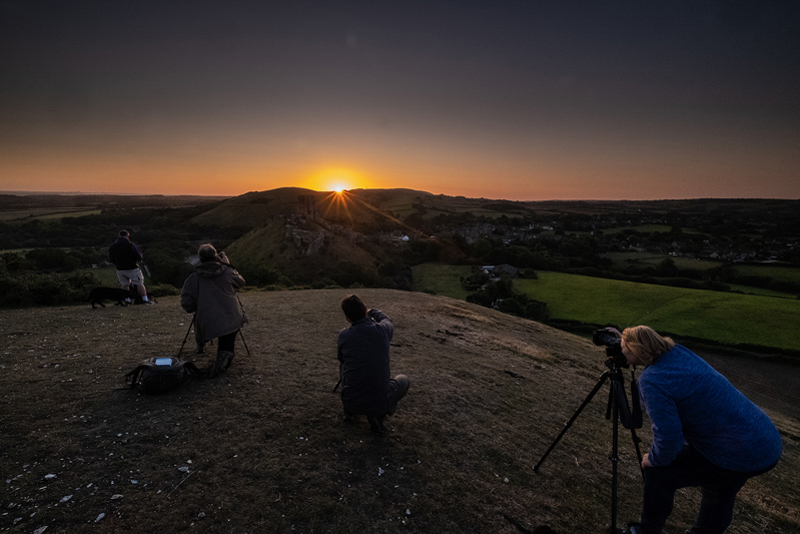 The colour didn’t last long and not long after, the sun was shining straight in our eyes! 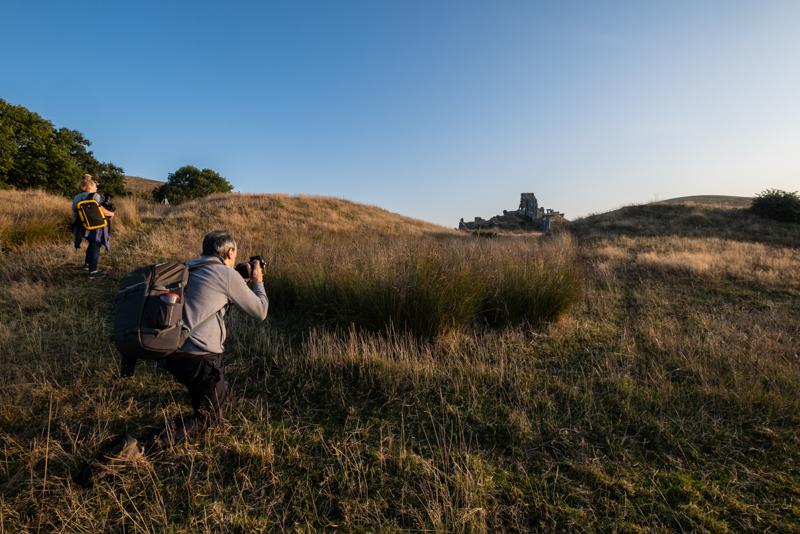 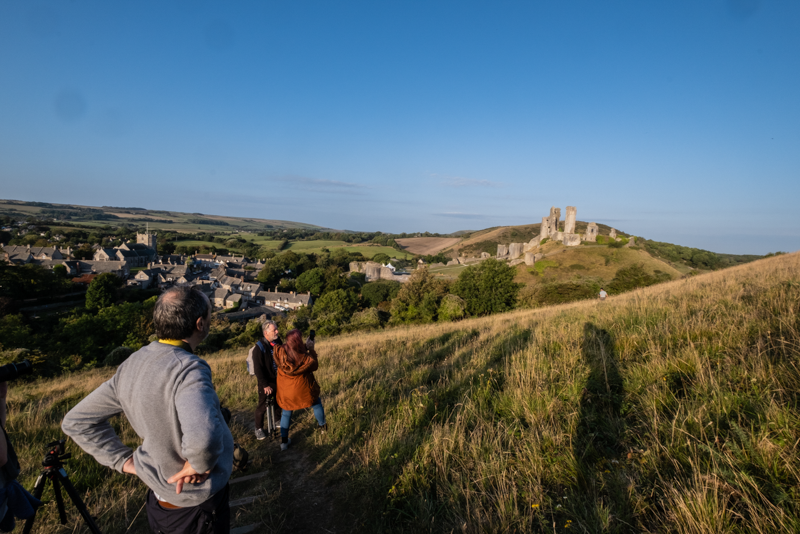 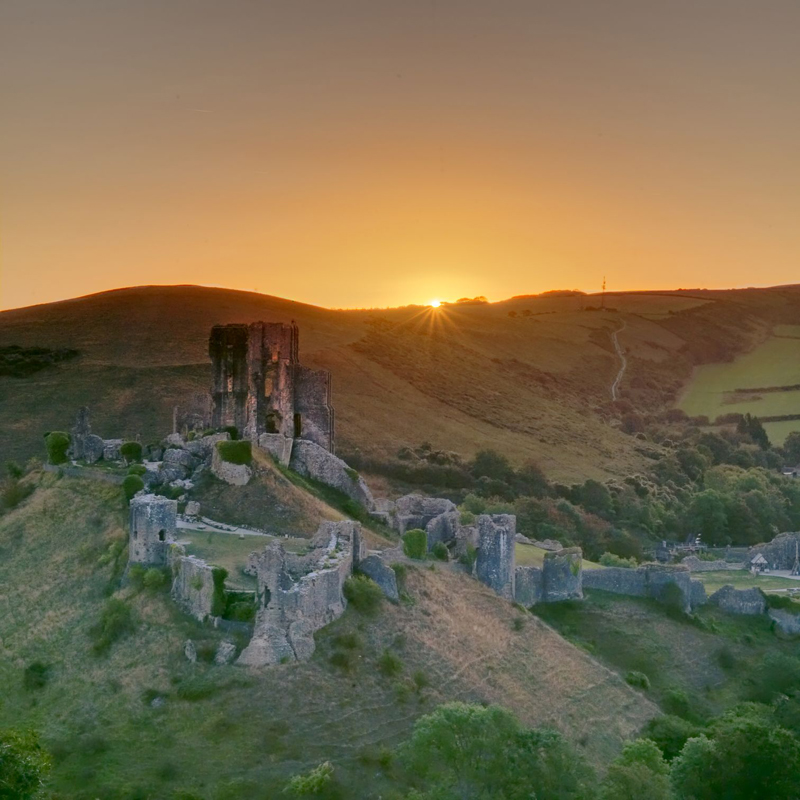 Jon’s image overlooking Corfe Castle – he made the most of difficult conditions!

It was turning into a clear and increasingly warm day! We then explored the castle from different angles before going into a nearby Cafe for a well deserved break and breakfast!

Winspit isn’t one of the Jurassic Coast’s famous places but it’s well worth a visit. The bay is about a 2km walk south from the village of Worth Matravers and has some interesting rock features on the shreline and a steep drop down to the beach. We walked down in the warm september sunshine! 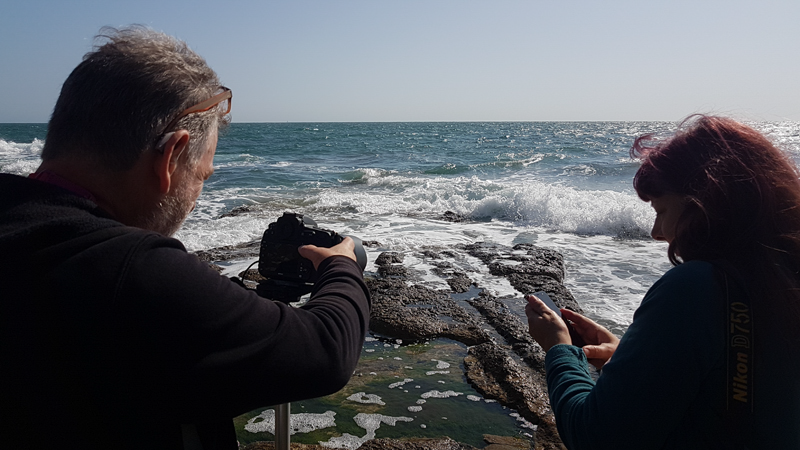 Doug and sheila at Winspit Cove 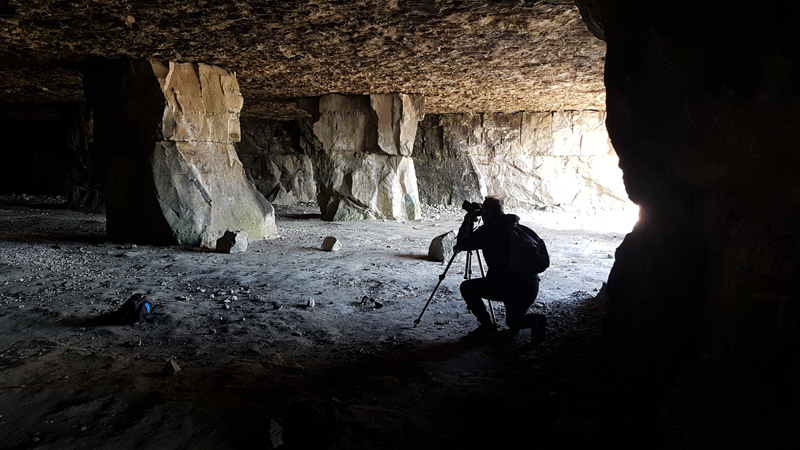 Winspit Quarry was a great spot for photography – and a good all weather alternative! 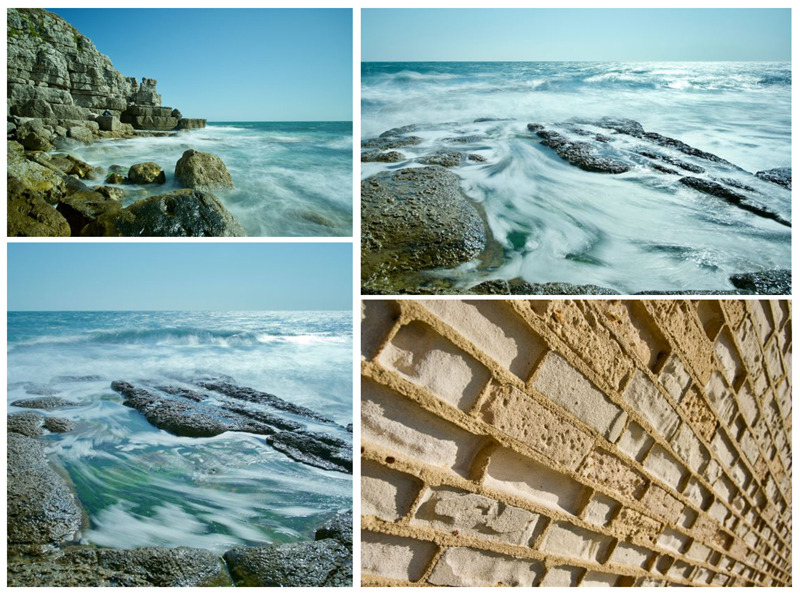 A collection of images from Andrew

In the afternoon we drove on to Kimmerdieg Bay, where i spent the first evening. The blue skies were unremitting however……… 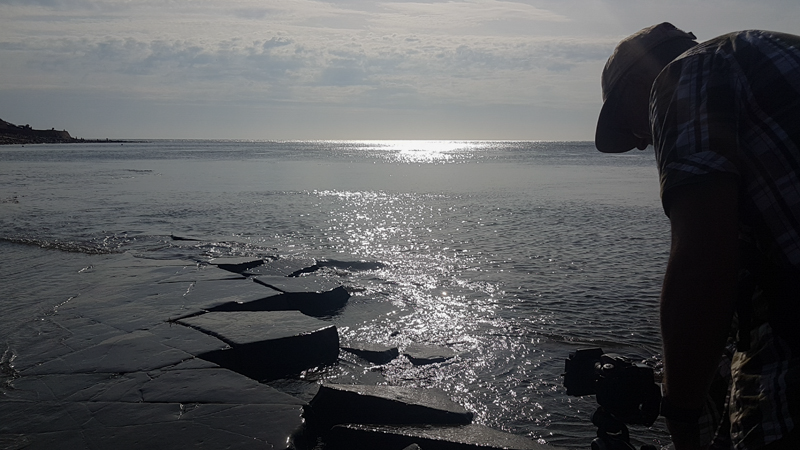 We didn’t really have the light at Kimmeridge. This is Doug dong his best. We had a choice of staying until sunset or morning on to Durdle door. with the incoming cloud we decided that an interesting sunset was unlikelyt so decided to move on.

More images from Andrew at Kimmerdige Bay. He did well with a nicely composed long exposure shot

Probably the most famous place in Dorset and a ‘must’for photographers. we then travelled on to Durdle Door. It was busoer than we expected for late September! The sky also closed in and ruined the chance of a sunset! 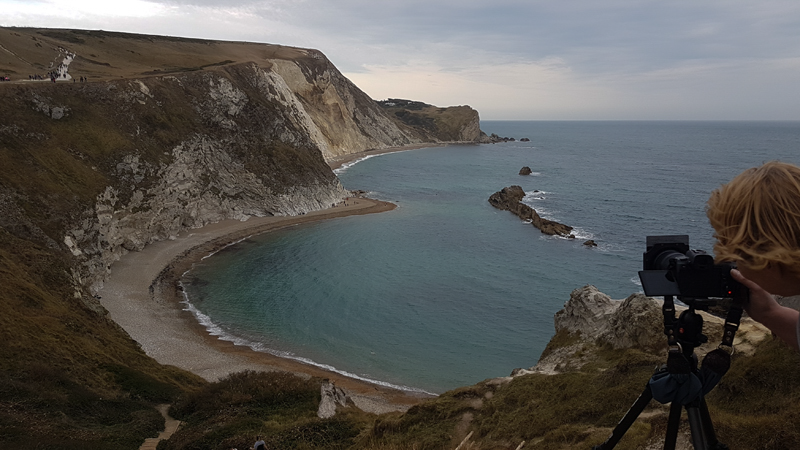 We then went to a local pub for a review session and something to eat!

Given the weather forecast of persistent rain until mid-morning, we decided that a dawn start wouldn’t be worthwhile. Therefore we agreed to meet up at the portland Bill cafe at 10am. We psent a few hours there until lunchtime as the skies cleared and there was some nice cloud to work with. 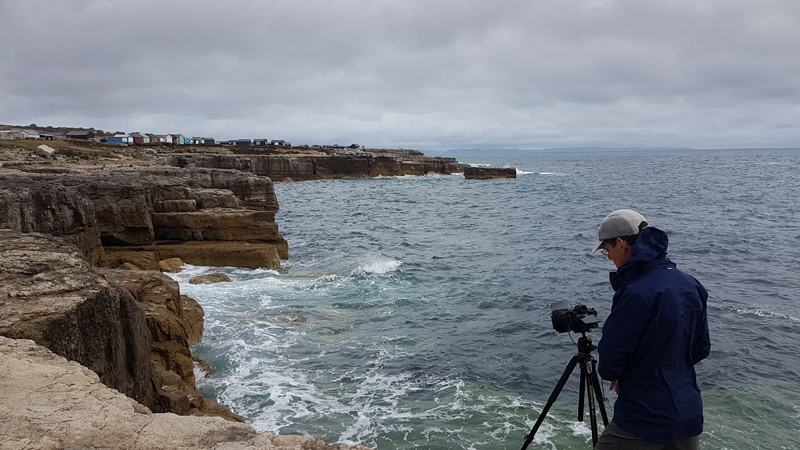 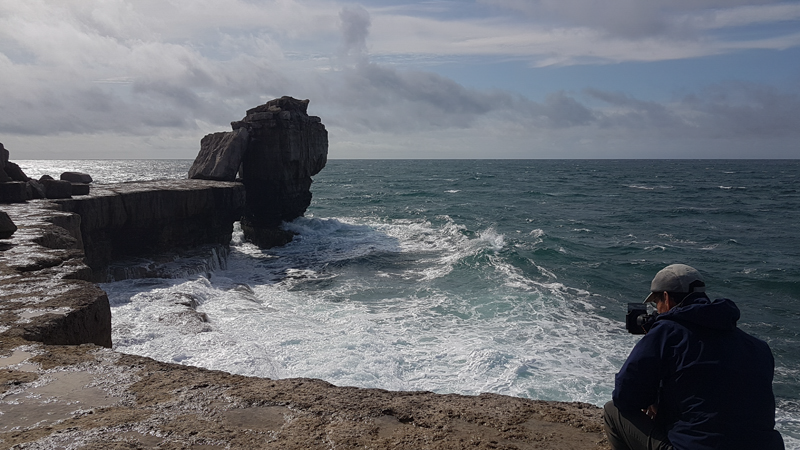 Jon at Pulpit rock and the coastline near to the lighthouse. 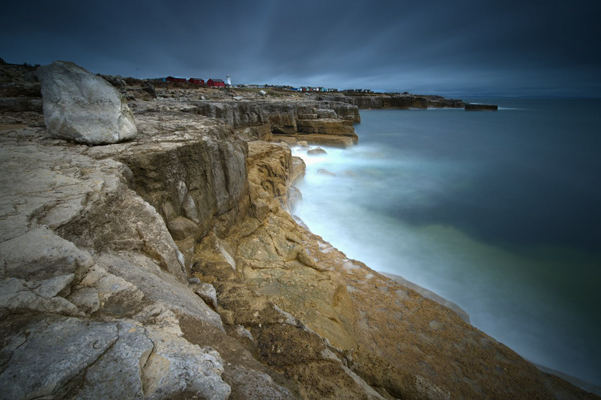 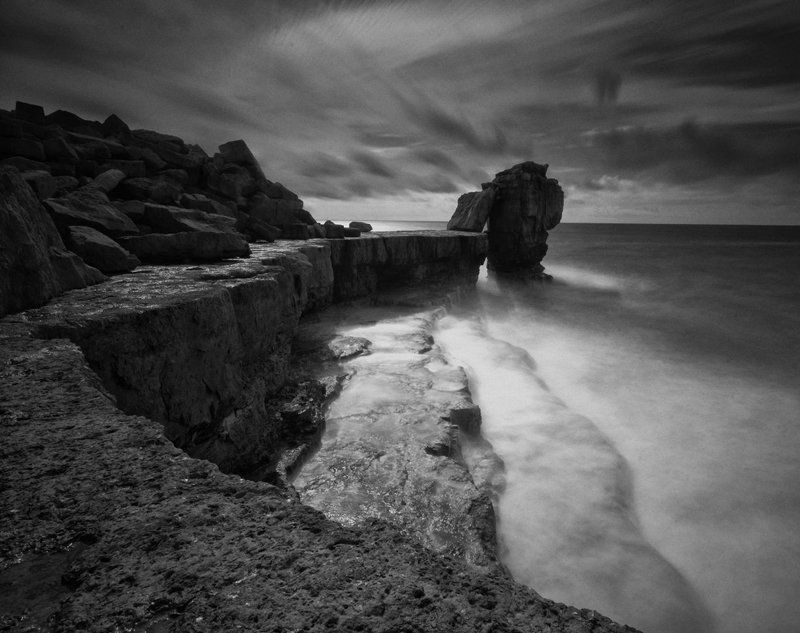 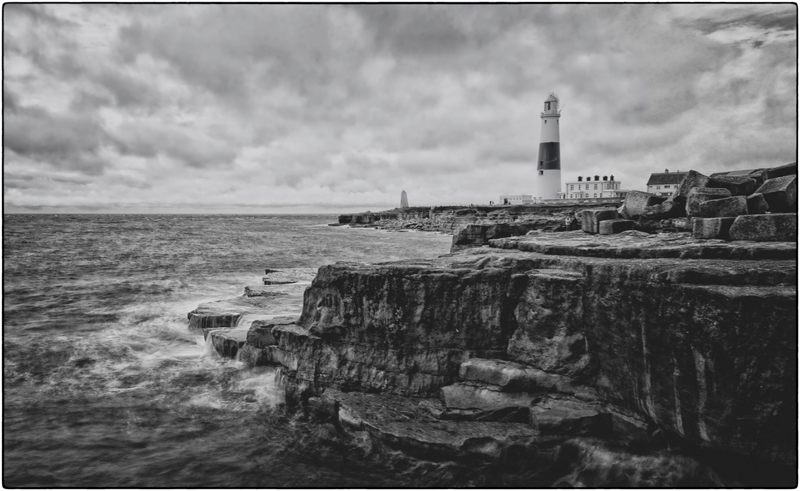 We drove back to Weymouth after lunch with the intention of returning for evening light. 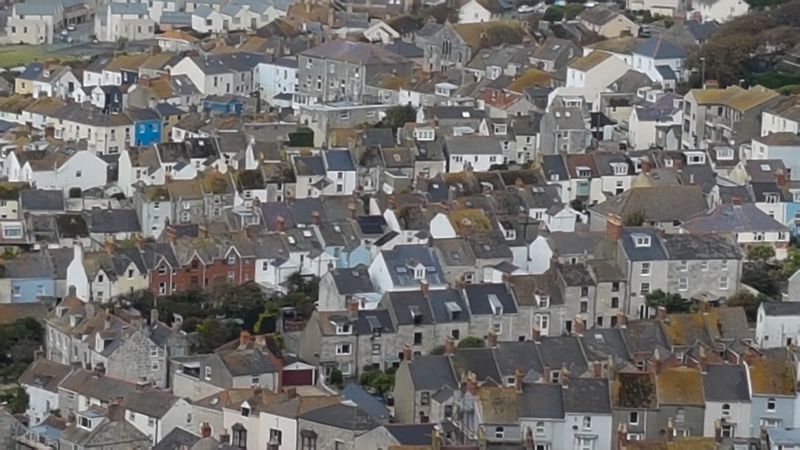 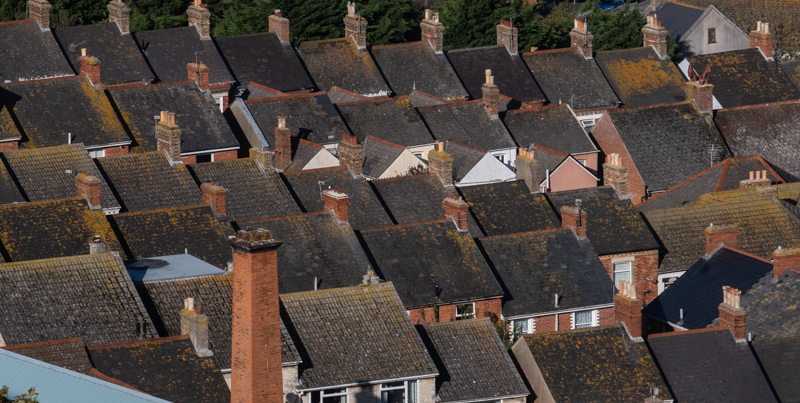 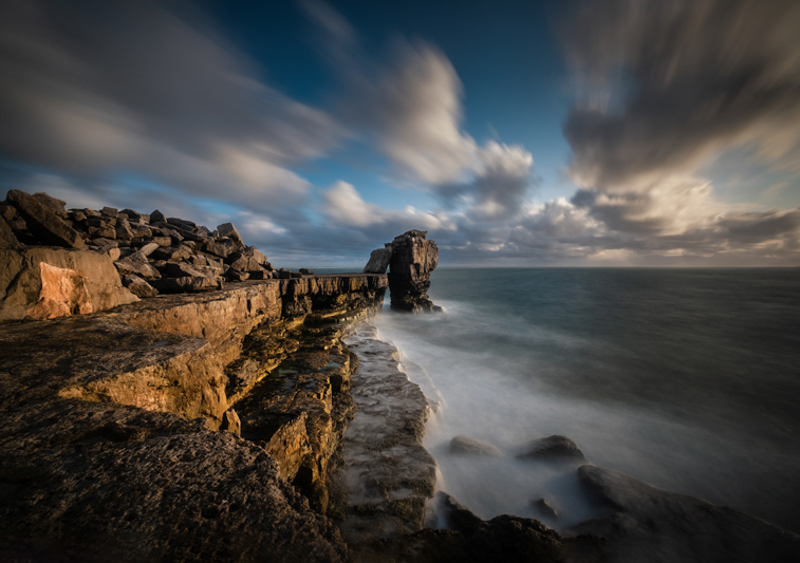 the evening produced some dramatic light back at Portand. This was a 15 second exposure with a lot of cloud movement. there was too much spray for any longer!

We finished the weekend at Portand and one by one the group left fro the long drive home 9to various parts of the country!)

There was time for a return to the studio for a brief final post-processing and review session before departure at around 4pm.

Finally, thanks to Doug, Sheila, Andrew, Steve, Jon and Debbie for booking onto the workshop – it was great to have your company and it was great to see some great images.

If you’d like to book on the autumn 2020 Dorset and Jurassic Coast weekend workshop it’s going to be from Saturday 3rd – Sunday 4th October (and they are properly long days from dawn to dusk with night shoots as well!). Please see Booking Details Here 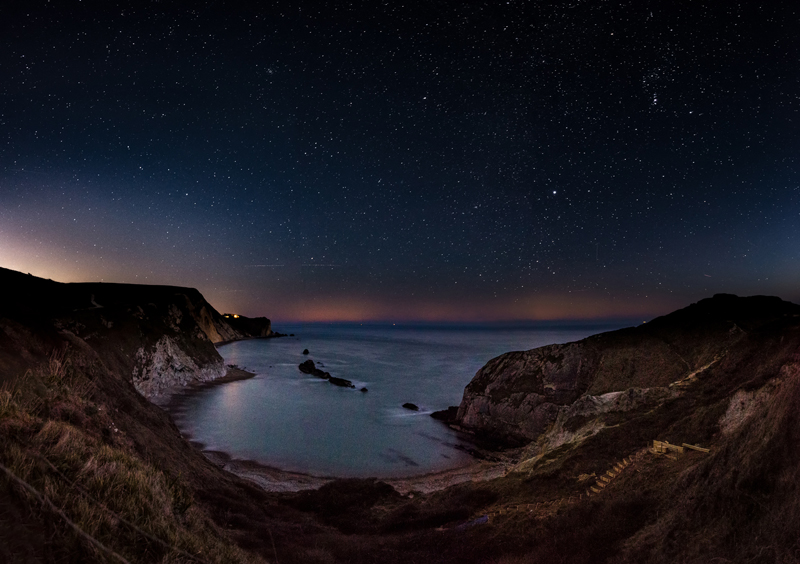 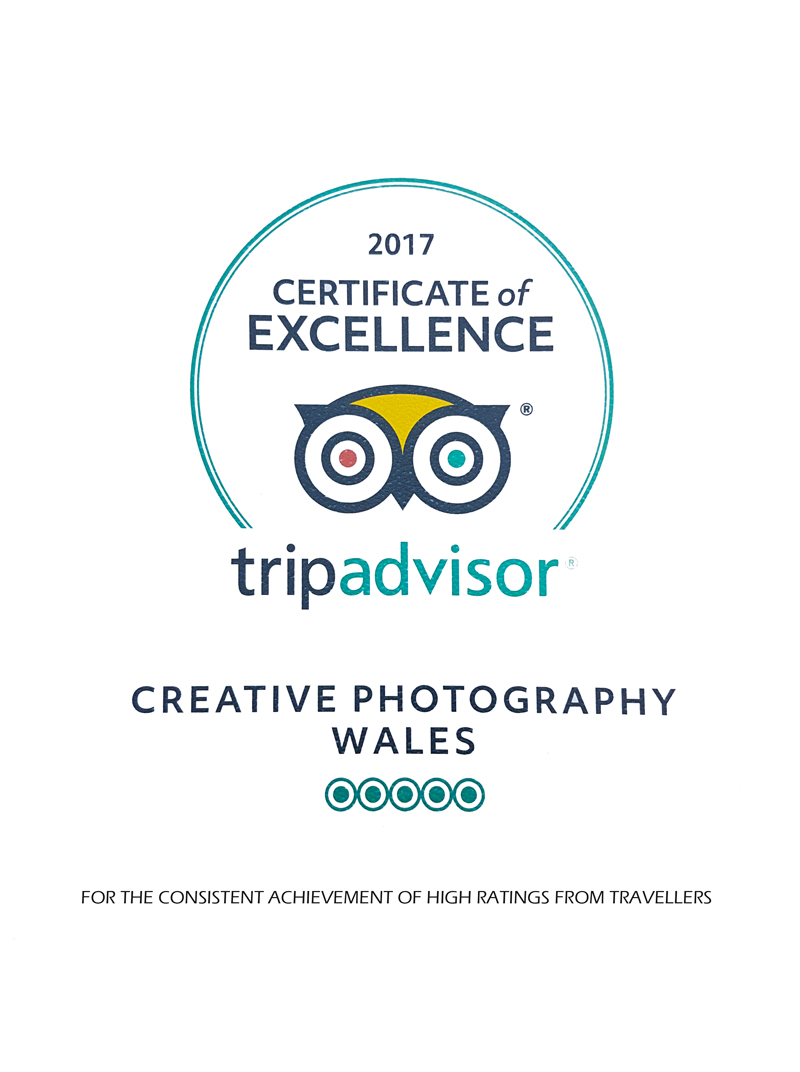